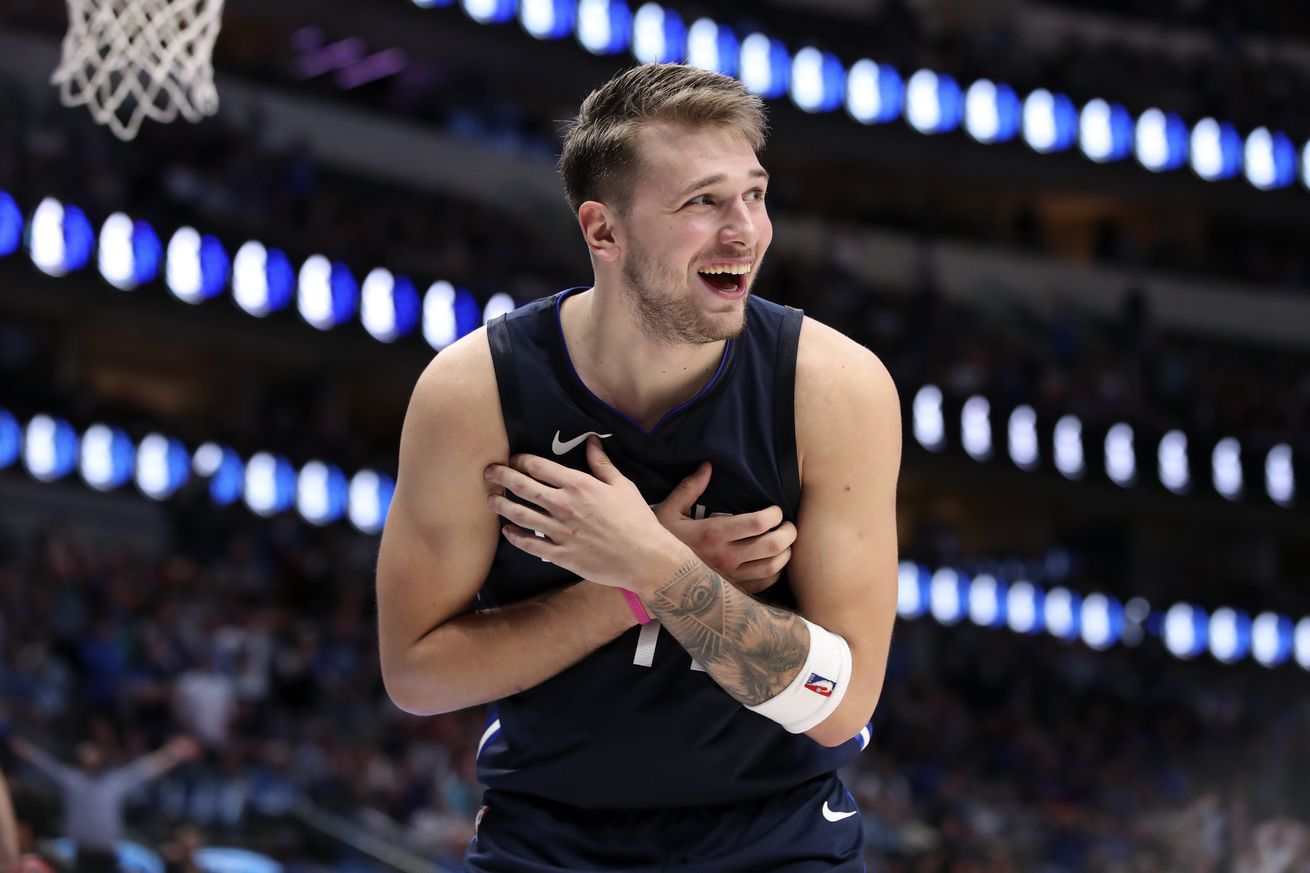 I look at all the box scores so you don’t have to.

Hello, Box Score Man here. I look at all the box scores across the league so you don’t have to. These are the ballers that stood out in my perusal of last night’s games.

Remember when Tom Thibodeau traded Zach LaVine and Lauri Markkanen on draft day for Jimmy Butler and Justin Patton, and the deal seemed like the best move ever before all things went to hell? Well, Lauri scored 35 points and grabbed 17 rebounds in the Bulls first game. His usage rate was 33.7% with 59.5 True Shooting %. Good times. At least Covington is a legendary 3-and-D star and Jarrett Culver is super promising. Speaking of our Lord, RoCo is back! 15 points and 9 boards in the win over Brooklyn. Since he had no stocks, he’ll probably have about 8 against Charlotte on Thursday night. Even things out, you know?

Kyrie dropped 50 on the Wolves but couldn’t hit the buzzer beater over OBI-WAN OKOGIE, whom the defensive force is certainly with. Josh finished a game-high +22 in 14 minutes. Drip Saunders will need to up his minutes. They don’t win that game last night if not for the sudden burst Okogie gave them.

Josh Okogie led the Wolves with +47.8 Net Rating last night. This was the shot that got him going! A simple Dribble Hand Off (DHO) w/ Napier. (Ryan & Pablo’s O was excellent.) When Okogie scores, it’s like he chugs another Red Bull. 10 seconds later he intercepts Dinwiddie’s pass pic.twitter.com/p5Hl8UFrGd

BIG KAT is set to go bonkers this season. 36 points on 70.5 TS% in 39 minutes. 14 rebs, 6 stocks (three of each)! The Wolves defensive rating was 96.1 with him on the floor. Vanterpool’s drop coverage looked great on Karl. As for Wiggins, 27 shots is too many shots. Gulp. His TS% was an abysmal 37.7% but he had a few clutch shots in the 4th and OT. His -26 was a game-worst. His 5 offensive rebounds were a delightful surprise. The way he attacked in the new open system was cool. The way he bricked jumpers was not. With that being said, I think Eric in Madison is a wise man (see his tweet below) but me, I Am Box Score Man and I have numbers to discuss.

I have made a choice to tap out on the Wiggins argument. I just don’t want to litigate him and his performance every night. Too exhausting.

MOVING ALONG…Dame Lillard has not stopped being a very dope PG. 32 points, 8 assists, 4 rebs. You can bet he’s thinking about going 3-10 from deep in the 8-point loss to Denver. Hassan Whiteside looked marvelous. 16 points, 19 rebounds. That guy is humongous, a word I can never seem to spell correctly the first time. With Hassan on the floor in the Blazers first game: 134.3 ORTG, 94.6 DRTG. That seems amazing. We’ll monitor this. That Jokic guy remains elite. He only played 24 minutes though. 4 fouls. 20 points, 14 rebounds, +14.

Hornets rookie P.J. Washington set a record for threes made in a career debut. I got him in my Dynasty League. He rewards me with 7 threes! I already love this rook. A new record! See my PKP Draft Model almost never fails (don’t bring up teammate Malik Monk to me as his career thus far doesn’t fit the Always Draft Kentucky Basketball Players narrative I am trying to drive here). Washington scored 27 points in 38 minutes on 75.5 TS%. Wolves will see him tomorrow night. Glovington is gonna hound him though.

One guy I’ve always really liked watching if I get the chance: Domantas Sabonis. 27 points, 13 rebs. +31.2 Net Rating. He signed a 4-year, $74.9 million deal a couple days ago. Smart move by the Pacers to get that done. I also like the Heat’s unconventional point guard, Justise Winslow. His new teammate, who works very hard, Jimmy Butler, did not play due to the birth of his child. Winslow went for 27/7/7 and was +22. Get him in your fantasy leagues before nobody will trade him. Starting in place of Butler was some guy named Kendrick Nunn. Put him on your radar. 24 points, +27. Jimbo will miss plenty of games so keep an eye on him in daily fantasy leagues for a cheap lineup pick that could produce.

Our pal Luka Doncic (if you don’t like Luka, we probably can’t be friends) had 34 points and 9 rebs on 75.5 TS%. He and Kristaps Porzingis are going to be such a sweet duo in Dallas. Dumb Knicks stay dumb. Although, to give them some credit, Julius Randle is quite good. 25 points, 11 boards, 6 assists, and 3 steals in his Knicks debut. The No. 3 pick looked good, too. R.J. Barrett had 21 and 5 on 71.1 TS% in his first NBA game. I hope I see Walt “Clyde” Frazier at Target Center again this season. I love that man.

The Spurs are up to more Spurs things, which is my introduction to telling you that Bryn Forbes is talented. He started at the two. 20 points, 5 rebs on 75.1 TS%. He can rip it from deep. Another guy that’s gonna be letting it fly this season is Donovan Mitchell. 32 points, 12 rebounds in his first game. Plus he did this:

I like a lot of Jazz players. Royce O’Neale is one of them. I love small sample sizes. For instance, his +92.7 Net Rating in 30 minutes. I can’t say that I like a lot of Kings players outside of Belly and Buddy and De’Aaron Fox. Have you heard Fox went to Kentucky? Hield had a strong debut after getting a contract extension to stick in Sacramento (4-years, $94 million), scoring 28 points to go with 5 rebounds.

Did ya’ll see our friend Ricky last night? He had 11 assists. Devin Booker had 10. Phoenix won the game and basketball reference shows me they only had 31 or more assists like they did last night five times in 2018-19. RUBIOOOOOOOOOOO! Ayton is going to love playing with him.

“You don’t know when the pass coming. You just gotta keep running.” pic.twitter.com/RZujZMnF9u

Speaking of old friends, Tyus Jones had 15 points and 7 dimes in his Grizzlies debut. Starting point, and prized rookie, Ja Morant, had 14/4/4 in 25 minutes. He also did that rookie point guard thing where he had 6 turnovers and finished -29. Memphis will likely be far better with Jones on the court this season, but Ja Rude obviously needs his reps in pursuit of stardom.

What caught your eye?