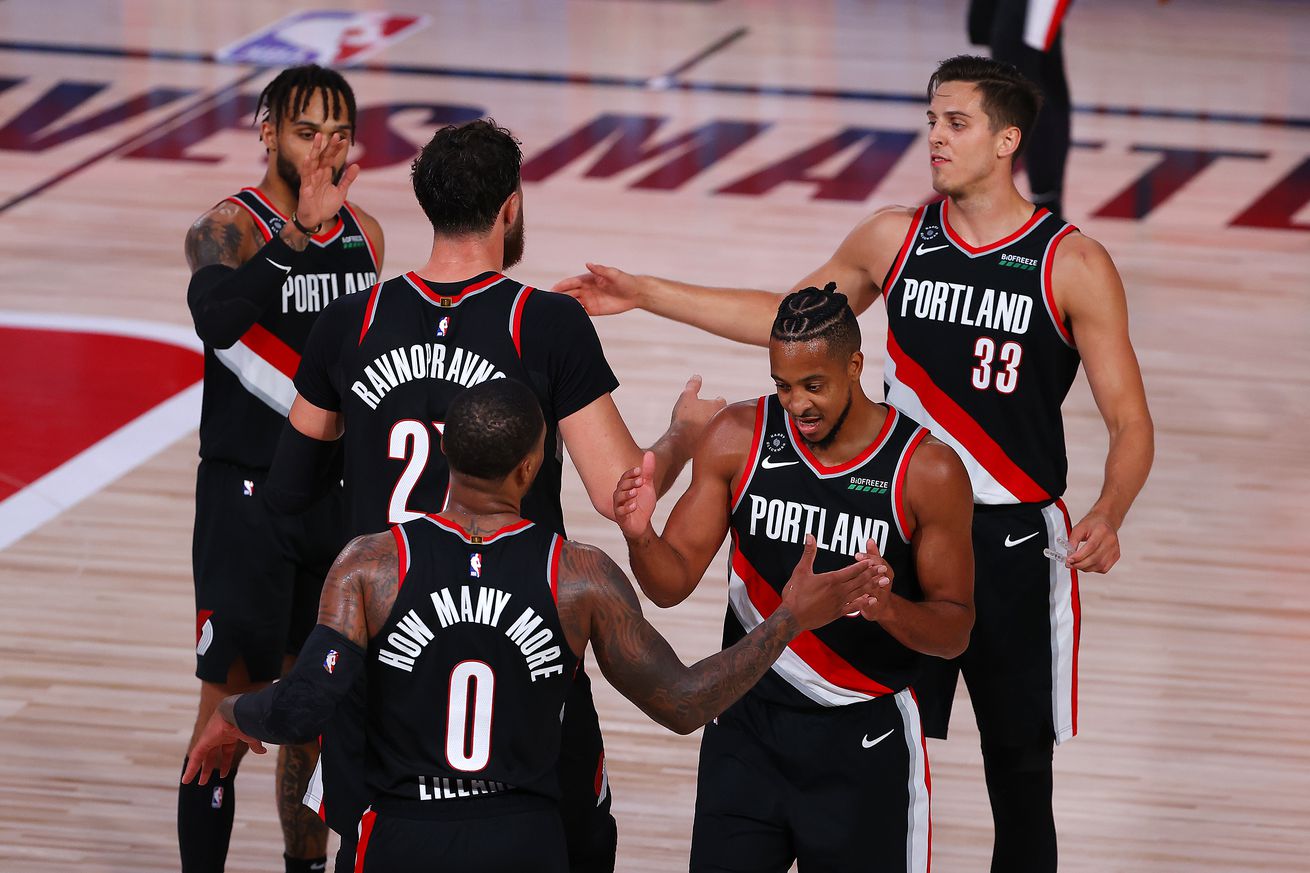 We’re back for another weekend preview of the bubble in Orlando, with a few main story lines emerging. For one, Phoenix and Portland look like the two best teams vying for the 8th spot in the West, and by a large margin. At this point, Memphis may be lucky to get into the play-in tournament as the 9th seed, with Portland only 1⁄2 a game back and many other teams closing in.

The Raptors and Rockets have also been very impressive, while the Lakers and Clippers have mostly been slow out of the gate. There’s still time, but I wouldn’t want to be a struggling contender who has to face Houston in the second round. James Harden is playing magnificent basketball thus far, even though he hasn’t gotten a ton of recognition for it yet.

Lastly, the Sixers season is in the hands of Ben Simmons’ health. The star Point Forward is out for the foreseeable future with a knee injury, and Philly is likely toast without him.

With that in mind, let’s take a look at what’s in store for the weekend.

This isn’t a great game, necessarily, but I mostly just wanted to point out how awesome it is to have basketball at noon on a Friday. That’s the most exciting part of this game, along with DeMar DeRozan getting the bulk of his minutes at PF in the bubble being incredibly effective.

Well, Memphis really, really needs this one, and they’re going to need a lot from Ja Morant without Jaren Jackson, Jr. in the fold. Unfortunately for Memphis, their star rookie is going to be hounded by Chris Paul and then will get to deal with Steven Adams after a ball-screen. Yikes.

I love these matchups between the Eastern Conference elite. The abundance of length and ball-handling on the wing tonight is going to be awesome. I also think it’s worth noting that Nick Nurse is really the guy we all thought Brad Stevens was about 2-3 years ago. If (when) these teams face off in a playoff series, I’d expect Gordon Hayward to be the x-factor in that series. Toronto can give Boston, and Jayson Tatum in particular, several of the same issues that Milwaukee does defensively, so they’ll need production from Hayward as a secondary ball-handler.

I don’t know what to make of this. The Blazers are on fire, the Clippers have been a little sluggish out of the gate, but in theory LA should be able to contain Portland. I’m going to continue to enjoy watching Gary Trent, Jr. showcase just how damn good he is, while Dame reinforces for the 10000th time that he’s one of the best shooters we’ve ever seen. It’s also incredible to see what Jusuf Nurkic looks like, he’s been awesome! I think I’m becoming a full-blown Blazers fan during the bubble.

How the hell is this game not on national TV? I guess nobody really saw Phoenix being this good, but man, this feels like a missed opportunity to not even have it on NBA TV. Anyways, Phoenix needs to keep winning to get themselves a shot at the play-in. Devin Booker against Jimmy Butler will be an incredible matchup, as will DeAndre Ayton vs Bam Adebayo. I’ll be looking forward to watching Mikal Bridges swallow up General Soreness on the wing. I think Phoenix gets another win here.

There’s a lot of starpower in this game, and the big thing is going to be seeing if Dallas can hang in there down the stretch. Milwaukee can really just hit you in waves, as we saw in the fourth quarter against Miami when they won the quarter by 20 points. Will Luka and Kristaps be able to weather that storm? I’m not so sure, and they’ve struggled mightily to maintain their high level of play down the stretch of games. Maybe Dallas keeps it close early, but if the Bucks play their guys I’d expect them to pull away down the stretch and win by double digits.

In theory, this has playoff implications for both teams, but by the time we get to Sunday it could only really matter for San Antonio. The Pelicans have shown no desire to play defense, and that’s not going to get it done. I’ve loved San Antonio’s experiment with DeRozan at the 4, but I’m not sure how that would shake out against Zion. I expect we’d see a lot of iso from DDR in that case, which could go either way. The bottom line is both of these teams desperately need to win these head-to-head matchups against each other so that they don’t need to steal as many against the league’s elite.

If Ben Simmons is still out (likely), this one could get ugly. Joel Embiid is the driving force for Philadelphia, no doubt. However, with Nurkic back in the fold, Portland is a little bit better suited for that matchup, and the absence of Simmons opens things up for Damian Lillard much more. If Philly tries to play a drop scheme against Portland, Dame is going to go for 40+ again. This would be a big, big opportunity for Portland to cement themselves as the 8th seed moving into the play-in.

Well, this is technically the last game on the weekend and it’s on national television, so I suppose we should talk about it. I’m not sure this game will be worth watching, and I could see LA resting guys, but if everyone plays this will be a bloodbath.