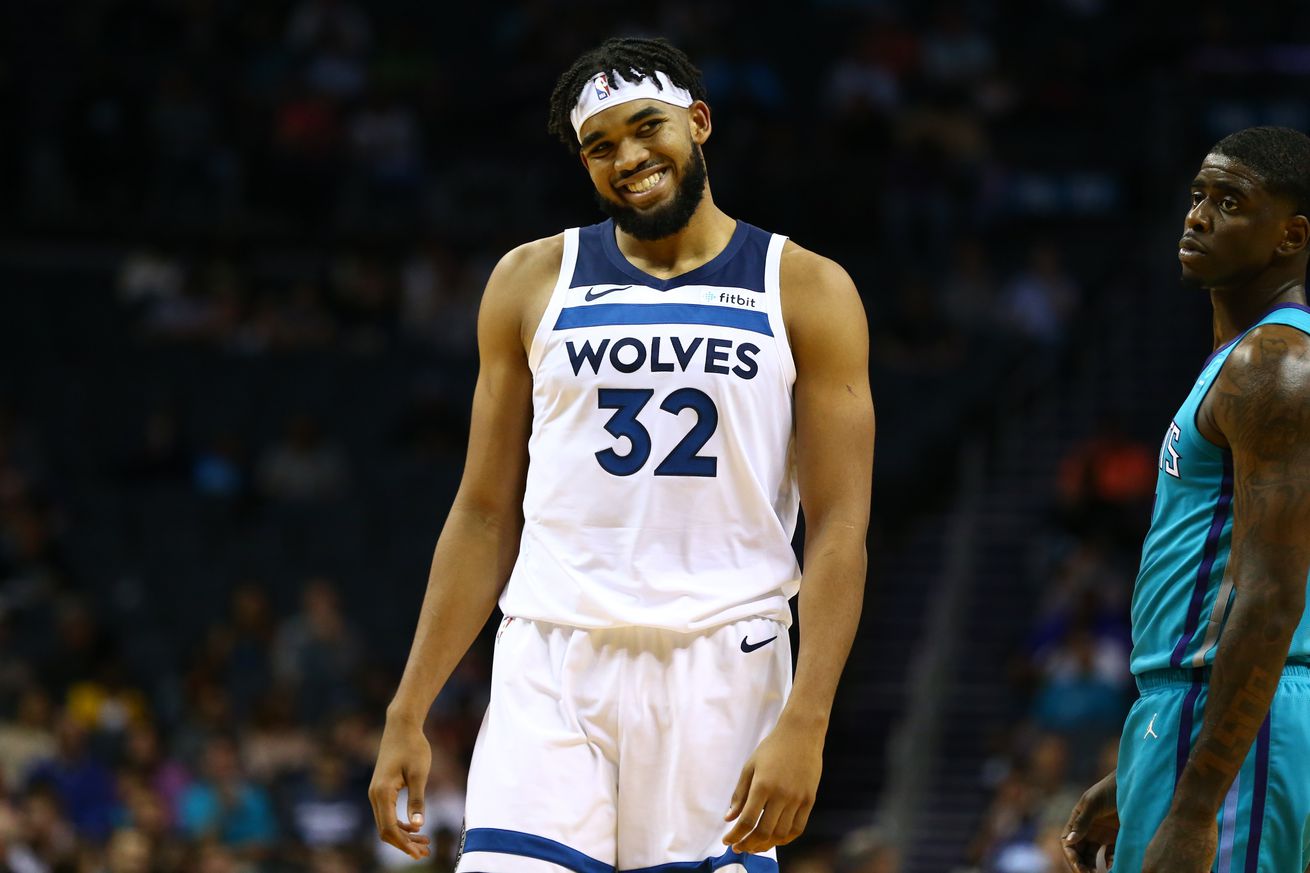 Is this what they call entertaining basketball? I mean, I’ve heard of it before from rival fans but never actually suspected I would be able to enjoy it for myself. They seem to be happy for most of the season and I feel happy right now, so this must be it. I don’t want to hear anything about how it’s only game two of 82 against an inferior team and how this can and likely will go downhill quickly.

I’m going to enjoy this. Minnesota Timberwolves dispatched the Charlotte Hornets in their own nest on Friday night, 121-99. Let’s run the microscope over the best bits.

It’s genuinely wild to think that a guy who averaged over 24 points and 12 rebounds last season could ratchet his game up multiple levels, but that’s what we are witnessing. After dropping 36 points, 14 rebounds, three assists, three steals and three blocks in the season opener, Karl-Anthony Towns somehow reached even deeper into his bag in this one.

The franchise pillar dropped 37 points on 13-18 shooting from the field and 4-7 from behind the arc, adding 15 rebounds, four steals and two blocks to his gaudy box score. Oh yeah, he played just 28 minutes as well. Towns has been accused of putting up empty numbers at times in the past, but he was genuinely as good as those stats reflect tonight — maybe even better.

He had it going on from everywhere scoring-wise. He was splashing home triples from any and all spots, eating home-cooked meals down on the block and destroying the Hornets on the offensive glass. However, he wasn’t just feasting selfishly, he was setting the table as well. He punished double-teams time and time again with pinpoint passes, whether it be cross-court slings to open shooters or high-level helpers for cutters like you see below.

This pass by Karl-Anthony Towns. lol my goodness pic.twitter.com/E06LM4MVJu

Importantly, he was also very adept at quarterbacking the Timberwolves’ impressive defensive performance. The steals and blocks were nice — his hands and reactions were as sharp as they have been — but it was the ability to drop in pick-and-rolls and provide cover that stood out the most. He was great defensively in Brooklyn, too, so hopefully this is the beginning of a new trend.

In all seriousness, how good is it to have a competent looking bench?

It’s been a bugaboo for Twin Cities basketball seemingly since the dawn of time, but in a meagre sample size it looks like Gersson Rosas and Ryan Saunders have the makings of a productive second unit on their hands.

Minnesota dropped 42 points off the bench in this one, a nice little leap from the 21st ranked 35.2 they put up on average last season. The unit Saunders is deploying at the moment seems cohesive and on a string, not that of a five-man squad that have barely played together.

It seems like Josh Okogie is ready to take a leap offensively, even if he is still prone to moments of panic and wildness. Jake Layman looks like a legitimate piece to the puzzle with his athleticism, shooting and defense. Noah Vonleh is unspectacular in the box score but is doing a bunch of little things that big men need to do. And Shabazz Napier, despite not being able to hit the broad side of a barn with his jumper, has been the floor general that this team craves.

The second unit was a huge reason Minnesota was able to compete against Brooklyn on Wednesday and that rung true again tonight. Unfortunately, there has been one missing link in the ironclad chain so far.

That weak link on the Timberwolves’ otherwise awesome bench unit has been Jarrett Culver. Now, the 20-year-old just featured in his second game in the best basketball league on the planet, so there is some slack that needs to be cut, but he hasn’t had a pretty start to his debut season. Tonight, he failed to hit any of this three field goal attempts or register a point in 14 minutes of play.

He has looked lost in the run-and-gun offense thus far, often left as a corner-bound bystander as the Wolves unfurl their plays. When he does get the orange, he seems unsure whether to try and get his own shot or just deflect that role onto one of his superiors. Culver has an NBA-ready offensive skill set, so increased assertiveness shouldn’t be far away.

Defensively he looks more comfortable. He can play off his instincts more and looks like he is already advanced at fighting through screens and sticking to his man. He got caught ball-watching a few times, but that’s something all young players have their battles with.

It probably doesn’t help his confidence and rhythm that Ryan Saunders seems to want him tethered to the bench for long periods of the game, but there is a ton of capable wings on this roster and Culver needs to force his way into the lineup through production.

Let’s hope that starts to happen in game three.

Robert Covington hasn’t a negative over his first two outings, but he does seem to be an unspoken minute restriction and a little rusty. That’s not surprising, he hadn’t played a real NBA game since last December until the Brooklyn tilt, but it is worth keeping an eye on.

Tonight, he featured in just 18 minutes, the lowest mark of any starter. Granted, it was a blowout where all the starting unit bar Andrew Wiggins (33) played under 30 minutes, but that still seems low.

Make no mistake, this isn’t a gripe. While he is out there is still impactful on both ends and while the Timberwolves are winning fans will be happy to let him rest up. However, when the games get tougher and schedule ramps up, let’s hope that RoCo is ready to go. He is too important not to be.

To put it bluntly, Jeff Teague did not have a good night. At the final buzzer, he ended with just four points on 1-4 shooting and five assists in 22 minutes of play. Shabazz Napier outplayed him tonight and deserved to outpace him in minute totals, too.

He was his usual hesitant self on offense, struggling to ramp up the pace like Saunders wants and consistently missing Towns on rolls and pops. Towns is going to take a fair share of the top-of-key touches off Teague, but when the point guard does get his he needs to make smarter decisions.

Defensively was much of the same atrocity. He puts Towns under immense pressure in pick-and-roll schemes with his inability and unwillingness to fight through screens and recover to ball-handlers. This forces Towns to step up and creates open looks all around the rim. Thankfully, KAT was great at cleaning up Teague’s mistakes tonight, but it won’t be like that every night.

The scheme, culture, franchise player and attitude around this team has changed dramatically already. Now Jeff Teague needs to do the same.