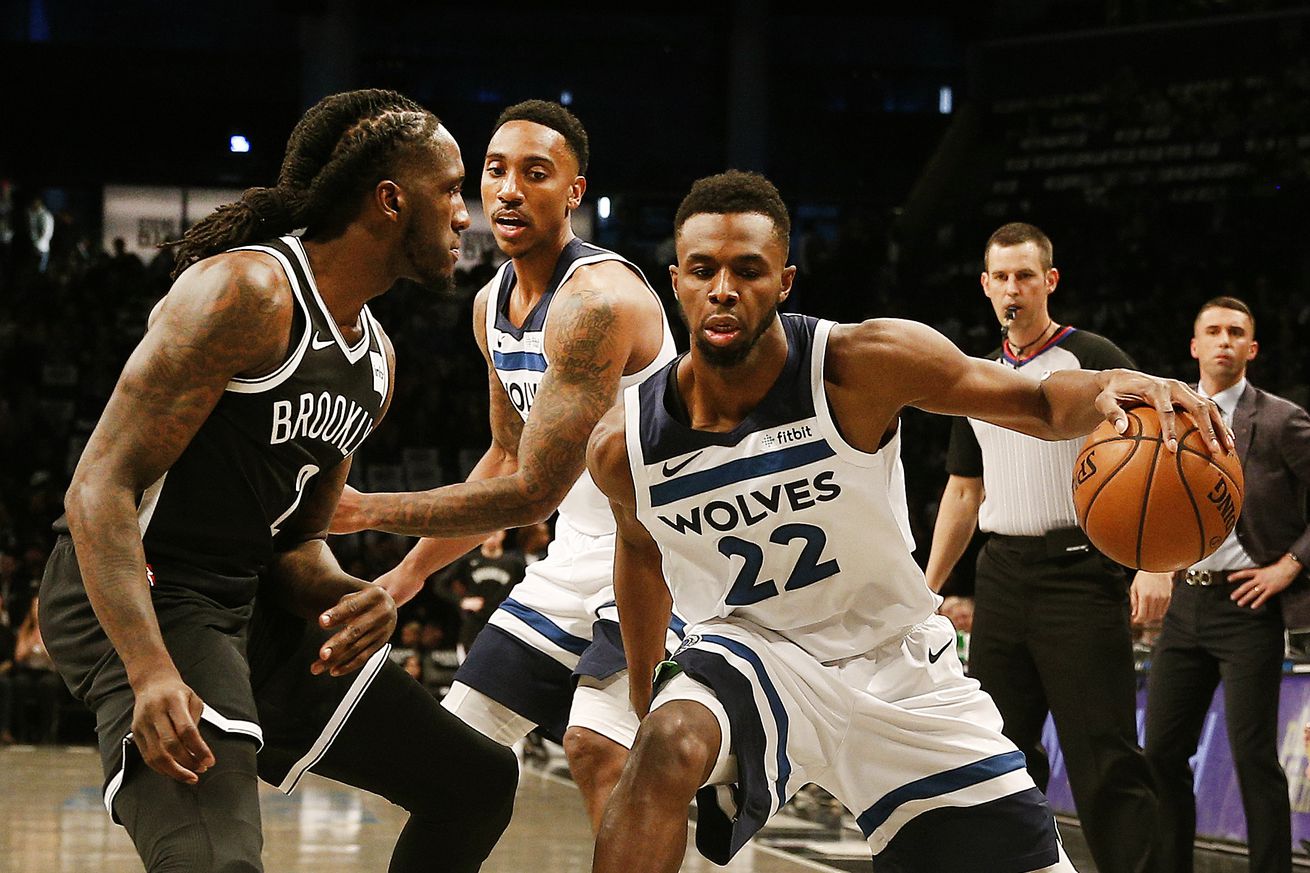 What we noticed from the Timberwolves opening day win.

Now that’s how you do a season opener.

As the smoke cleared from what was an all-out gunfight, the Minnesota Timberwolves stepped over a valiant Brooklyn Nets and emerged victorious, marking down their first win of the 2019-20 campaign while they were at it.

Kyrie Irving was an absolute flamethrower, dropping 50 points and seven assists, but it wasn’t enough to overcome a pleasantly fun Wolves squad. The two couldn’t be separated after regulation and it ended 127-126 in overtime.

So what were the defining points that jumped off the screen? Let’s take a gander.

Over the preseason season, Andrew Wiggins and his inability to do pretty much anything right was already a huge talking point in Wolves World. After last night, it’s slightly more blurred.

On one hand, his counting stats and impact for much of the game was horrendous. His 21 points came from 27 shots (37%), he failed to register an assist, he was a -26 in a one-point win and his net rating was a rancid -33.7, per NBA.com. On any other occasion, we would be running and hiding from the stench that was wafting from his night, but this one ended on an extremely positive note.

Wiggins was absolutely instrumental in securing the victory in the closing stages. He made three athletic and well-defended layups in crucial moments. One to keep the Wolves in it with 90 seconds left in regulation, one to give them the lead toward the end of overtime and one to extend the lead he gave them a few plays later.

In the end, he was the reason they won the game. However, he was probably the reason it was so close to begin with.

Death, taxes and Josh Okogie lighting up games with his work rate.

The sophomore’s role has changed with the influx of wings acquired in the summer, but it didn’t change his impact. Okogie finished the game with 11 points, three rebounds, two assists and a steal, a more-than-solid box score for someone who played just 14 minutes. As usual though, his footprint reached far beyond the stat sheet.

Okogie was his usual active self defensively. He hasn’t lost his ability to make himself skinny and slip through screens and his knack for being in the right place at the right time. A collection of skills that are priceless for the Wolves.

He capped off his hustle-filled defensive showing with this game-saving stop on the scorching Kyrie Irving. Okogie put the clamps on the six-time All-Star, but Irving’s shifty handle and unfathomable body control still allowed him to recover and get off a shot, somehow. The damage was done, though, and Okogie came out of the tangle triumphant.

Fun to see the bench mob Josh Okogie after the final buzzer. What an opener. pic.twitter.com/S5rPZwLim9

Watching that all season is going to be fun.

In case you haven’t noticed yet, Karl-Anthony Towns is reinvigorated, happy and ready to be the leader this team needs. In game one of 82, he showed every bit of that and more. He has been notorious for starting off seasons quite slow for his lofty expectations, but, like his entire demeanor toward the franchise, this year seems different.

The new inverted offense allows KAT to set up at the top of the arc and shoot freely or use his unholy athleticism to punish his way to the rack. However, it was his defensive staunchness and discipline that was the most refreshing change to his usual game.

He was excellent in new defensive coordinator David Vanterpool’s scheme. He dropped in pick-and-roll coverage with intent and control, walling up against drivers time and time again, swatting away a few shots in the process. Including this timely stuffing that prevented Taurean Prince from winning the game off in the dying seconds.

He refrained from being his handsy self and picking up stupid fouls, too, which has been a major bugaboo in his game.

It’s just one game but the narrative surrounding Towns remains true, if he can improve his defense he will quickly vault himself into one of the best players in the entire world.

Just like we expected after a preseason of launching any half-open triple that came their way, the Timberwolves weren’t shy from deep to begin the regular season.

On the night, they attempted 43 long-bombs. Unfortunately, they only connected on 13 of said shots — kicking off their season with a 30.2 percent clip. Outside of Towns and Robert Covington, who accounted for 10 of those 13 3-pointers, Minnesota severely lack effective outside shooters.

With that in mind, it shouldn’t be surprising going forward when we see more nights like this. The personnel just simply doesn’t match the system right now, but it’s the way successful teams need to play. Far too often did the Wolves lose games over the past few years by simply letting mathematics destroy them.

Since their inception, there has been very few times where Minnesota have had a collection of viable talents on the wings.

And while, pending Okogie and Jarrett Culver potential breakouts, it might not be elite talent, there is certainly a bunch of depth at the two, three and four positions. Along with Okogie, Culver and Wiggins, Treveon Graham and Jake Layman look like they could be handy additions to this team, especially if their debuts are anything to go by.

Graham finished with nine points, six rebounds, four assists after getting the starting nod from Ryan Saunders. He looked comfortable in the offense and brought intensity on defense, justifying his coach’s decision. He also contributed one of the plays of the night — this chase-down steal and 3-point play that swung the momentum in overtime.

What a sequence from Treveon Graham in overtime pic.twitter.com/tuFr52QwKf

Layman was impressive, too. He was a spark plug off the bench, showing an athletic ability to get to the rim and knocked down a pair of 3-pointers. On paper, Minnesota’s bench is devoid of genuine scoring options, so if Layman can take another leap as a bench option would be huge for this team.

At this point, just embrace being undefeated. It doesn’t happen often and it might not last long.