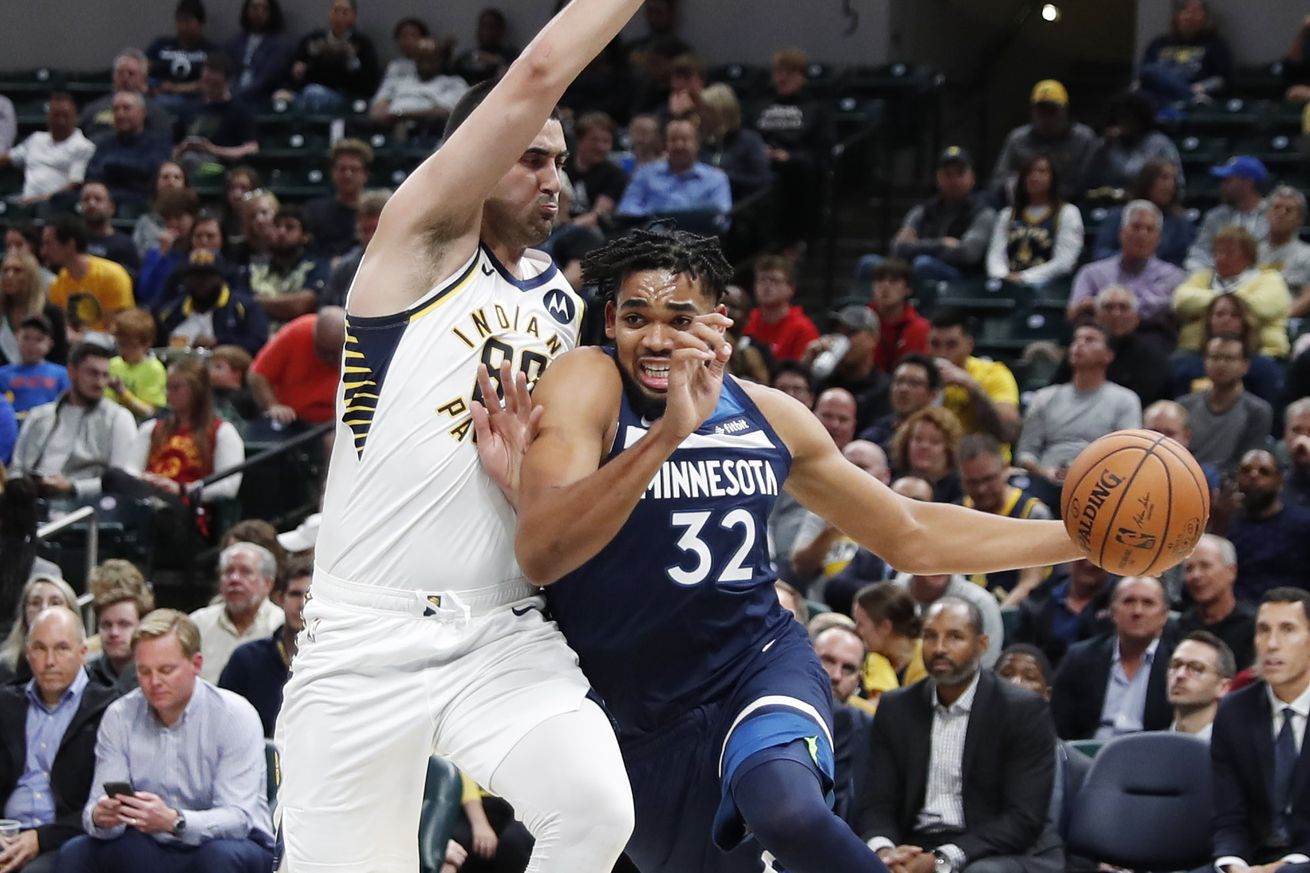 What to expect from the franchise cornerstone

From the moment he was drafted first overall, Karl-Anthony Towns has had the weight of the Minnesota Timberwolves franchise on his shoulders. To say that he’s lived up to the hype would be putting it mildly, as Towns has evolved into one of the most versatile offensive forces the league has ever seen.

There will always be skeptics and naysayers, and Towns certainly has deserved some of the criticism on the defensive end of the floor. To put the failure of the franchise in general on him, specifically from the “make the playoffs first,” crowd, is silly. Karl-Anthony Towns is the reason for hope in Minneapolis. He’s a top 3-4 player at his position in the league, making him a perennial All-NBA candidate.

Still only 23 years old, it’d be foolish to think that KAT is done growing as a player. That’s the scary part. Nikola Jokic and Joel Embiid get more love nationally, and rightfully so due to their team success. I’d be surprised, however, if Towns wasn’t firmly in the thick of that conversation by the end of the 2019-20 campaign.

How does he get there? The first thing anyone will point out is the improvement needed defensively. To this point, Towns has struggled to adequately defend the pick-and-roll, and too often is chasing blocks which have led to offensive rebounding opportunities for the opposition, as well as foul trouble for Towns himself. It seems that KAT has really committed to this end of the floor in the offseason, as noted by Robert Covington.

Has KAT improved as a defender?

Robert Covington: “Absolutley — I’ve been on his ass.

You don’t have to reach. I told him, ‘that’s where a lot of your fouls come from.’ He’s actually taking on the challenge, because he understands that he wants to be better.” pic.twitter.com/wgzHKkeayH

Towns was at his best defensively when Covington was in the lineup last season, as were the rest of the Wolves. A full season of that pairing could go a long way towards repairing KAT’s reputation on the less glamorous end of the floor.

Another area to watch for improvement this season will be how KAT is as a leader. He’s never been the most outspoken guy, but Minnesota needs their undisputed best player to take ownership of the team. It appears he’s ready to do just that, given the way he conducted himself in the offseason.

The workouts with teammates are awesome, but really, the immediate buy-in to the culture change is what was most important. It’s cliche, but teammates generally do fall in line when the best player buys in to what the front office is preaching. There will be lulls and disheartening stretches throughout an 82 game season. For the Wolves to stick together, they’ll need KAT to steer the rest of the locker room in the right direction.

Believe it or not, there are improvements Karl-Anthony Towns can make offensively, and I think he’s going to make them this season. He’s going to have the opportunity to be pretty much whatever he wants to be offensively this season, and that should be worth the price of admission alone.

We already know that Towns can kill teams from the perimeter or from the block. He creates a conundrum for defenses that few other players can. He punishes smaller players down low. Then, if you put a slow-footed big on him, this happens.

The only real way to stop him is to double him.

One issue Towns does have on offense, however, is getting in his own way. Once KAT catches the ball on the block, it’s usually a wrap for the defense. Getting into good, strong position in the post, however, has not been a strong suit for Towns.

It feels like a broken record at this point, but he needs to find a way to get better position down low without extending his off arm. Too often, he ends up in early foul trouble because of this. Adding strength is key here, but I also wonder why he feels the need to fight so hard.

Obviously, if he can catch the ball on the block, that is preferable. It isn’t like catching the ball a little bit further out is the end of the world, though. Between his remarkable mid-range shooting and quickness for someone his size, Towns should still be comfortable catching the ball in the mid-post occasionally.

Additionally, the mid-post may be where Minnesota prefers he catches the ball on occasion. When that happens, opposing defenses are surely going to send double teams, which should only open up lanes for players to cut or dip in for an easy basket. He seems ready to take advantage of those passing lanes.

Karl-Anthony Towns explaining the difference between passing from the top compared to on the block.

This is pretty awesome and rare from a media availability. KAT gets into the X’s & O’s. pic.twitter.com/hSa0DWltGE

Given the usage and attention Towns is likely to see this season, paired with the natural ability, it isn’t crazy to think we could see KAT average somewhere near 5 assists a night. His biggest barrier to hitting that number might be the shooting, or lack-thereof, of his teammates.

Mostly, I’m excited as hell to see what they do with Towns this season. It’s clear that he’s going to be the hub of the offense, and he should be. What’s really exciting, though, is that Minnesota seems willing to try stuff that’s a bit outside the box.

There seems to be a decent chance he’s used in a Jokic-lite type role, which would be exciting to show off his passing chops. Coach Ryan Saunders has also suggested the team may try to use KAT as the ball-handler in pick-and-roll scenarios, and why not? I mean really, what does this team have to lose by trying these sorts of actions?

The Wolves probably aren’t good enough to compete for a playoff spot quite yet, so why not try these things out and see what sticks? Is Towns’ ball-handling good enough to make him a consistent PnR ball-handler? Maybe not, but on a team starved for perimeter creation moving forward, it’s at least worth a look.

Heck, he’s such a great shooter, why not see what happens if you run him off a few screens to get a look from beyond the arc? You’ll never know if he can or cannot shoot off of movement until you try. If you’re ever going to experiment offensively, why wouldn’t you do it now, with a player who has already proven to be as versatile as anyone else in the league?

I’m not advocating for wasting possessions, and I don’t think that’s what they’d be doing by trying a few new concepts and actions with KAT. This is a team that literally has nothing to lose. It’s time to get weird, and see how much you can unlock from KAT’s seemingly limitless offensive arsenal. Zach Lowe often states that he believes Towns has the skillset to become the most versatile offensive big man in NBA history, let’s see just how much of that we can tap into.

In the end, this franchise begins and ends with Towns. He will ultimately determine just how good this team can be in the years to come. I have absolutely no idea what the ceiling is for Karl-Anthony Towns, but I’m sure excited to find out.