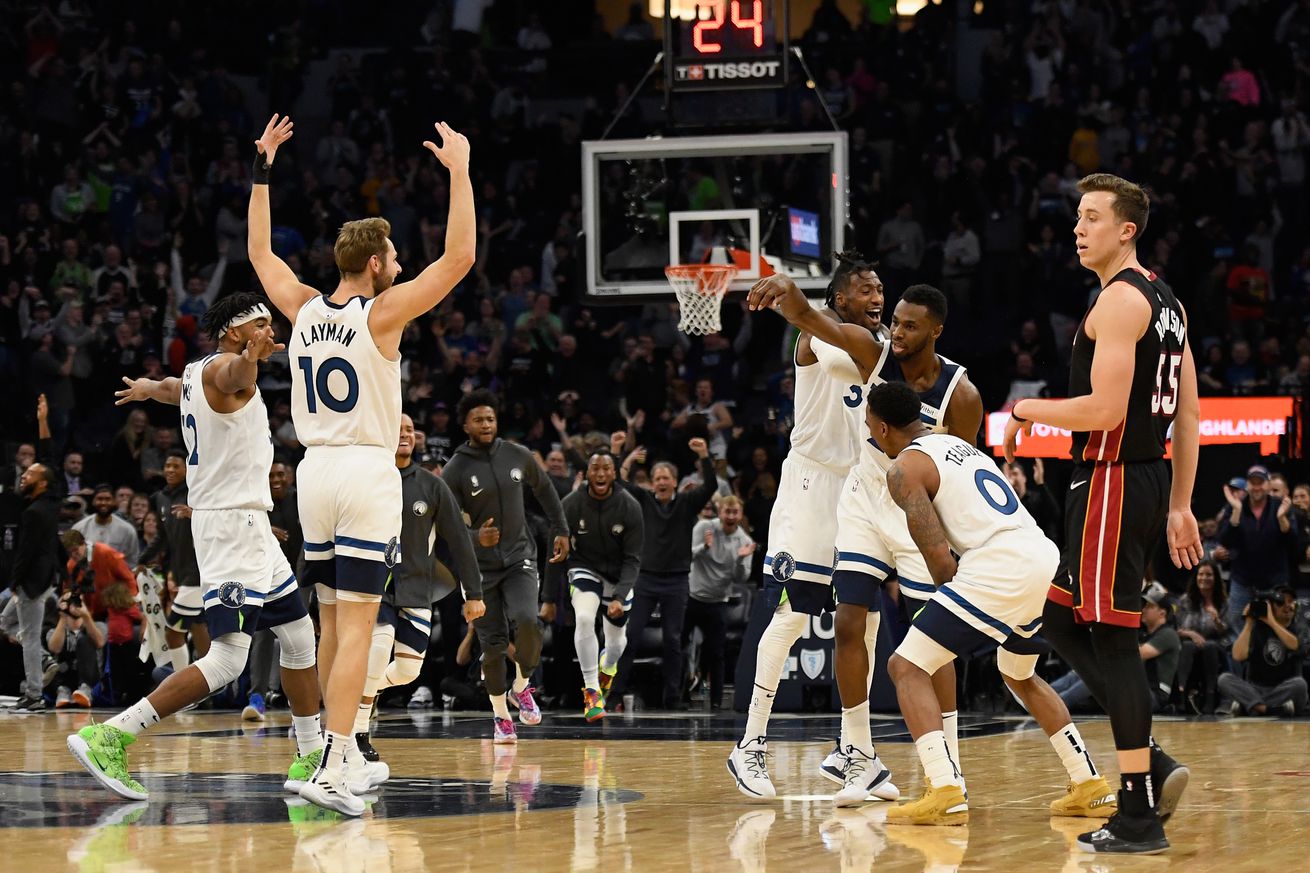 Hello, is it me you’re looking for? I hope so because The Wolf Nightcap is back, regenerated and revitalized.

A quick refresher for readers: the nightcap, even in its rarity, aims to serve as a robust complementary recap filled with quotes, notes, videos, and tweets.

General Manager of the West Coast Canis branch, Kyle Theige, did an excellent job recapping the Sunday Funday on Wiggins Island. Quick review: Wiggins caught fire from deep to push the Wolves past the Heat.

Now, it’s time for a good ‘ol nightcap at the Hotel Canis Hoopus. Did you forget the lyrics during the offseason?

Time to start something special. 3-0 is pretty special, right?

The start of something special. pic.twitter.com/ol47iJer6m

Those were Ryan Saunders’ first comments after the win. Wiggins played the entire fourth quarter at Target Center and, alongside Teague, pushed the Wolves to victory.

The video below is hard not to watch multiple times.

WIGGINS TAKING OVER FROM 3 pic.twitter.com/DbdXRyGdLe

We’ve all seen the shot values marked on the courts at Mayo Clinic Square by now. If you haven’t, your platinum Canis Card is revoked. OK, fine, sorry, check out Jake’s tweet about this below if this is news to you. Green is good. Red is bad. PPP = points per possessions from that spot.

The shot values emblazoned on the court is such an awesome idea and should really leave no excuses for the entire Wolves squad to shoot more efficient shots next season. pic.twitter.com/ywpUSptl8v

Saunders continues to talk glowingly about Wiggins, often saying the line above with a certain conviction previous coaches didn’t speak with.

Quote from Saunders about briefly benching Wiggins: “There’s a lot that can be made of relationships. I know some people may roll their eyes at the relationship aspect of coaching and things with players, but it goes both ways. The ability to take Andrew out, and then him being able to refocus with things, he didn’t hang his head by any means. We got him back in there pretty quick and he ended up putting together a nice stat line and playing almost 36 minutes. That’s something I credit him for a lot.”

#8: Through the thick and thin

Hero of the night, Andrew Wiggins: “It was a great feeling. My teammates got my back through the thick and thin.”

Wiggins on making four threes in the fourth: “It felt good. My first three-pointers made were in the last moments. I was missing a lot of shots, but my teammates kept supporting me, saying ‘shoot that same shot, it’s going to fall, it’s going to fall when it needs to fall,’ and it did.”

Me: Ryan, when you see Wiggs hit that third straight three, you see all the guys mobbing him on the sidelines, what’s going through your head in that moment?

Saunders: We gotta get a stop (smiles and laughs)

Saunders: Then I gotta get the guys in because there was only a minute; it was a short timeout. I was trying to call the guys over so that we can figure out what we were gonna do. But all plan aside, I was happy for him. I think the guys were more happy for him too because they know how we’ve been harping on the emphasis and things like that and then he stuck to it as its shown. The credit goes to him.

WOLVES MOB WIGGINS ON THE SIDELINES AFTER HIS THIRD STRAIGHT TRIPLE. KARL IS FLEXING, SCREAMING LETS FUCKING GO. TEAGUE IS SMILING HIS ASS OFF. THE CROWD IS GOING WILD. EVERY SINGLE WOLF IS GOING CRAZY AT TC. WE CAN BUILD THIS WOLF DREAM TOGETHER! pic.twitter.com/WWrk5CvG7b

KAT had 23/11/4+3stocks and praised Wigg. “He was complaining the whole game he can’t make a shot. I told him, keep shooting it’s gonna come together. The one thing I know about Andrew: It don’t matter how the whole game goes. He’s a star player & knows when he has to kick it up. pic.twitter.com/S0c1HBtLsu

Towns continued: “Listen, this is a team that plays together and we all were shooting pretty tough in the second half but of course when you need those last buckets you got Andrew. Shabazz Napier was also amazing in the second half keeping us in the game.”

I’ve had this image saved on my desktop for years. Why not post it now? (No, I do not think he’s a max player but he saved the home opener alongside Teague and deserves tons of credit for the win.)

Jeff Teague finished with 21 points, 8 assists in the Wolves win. “I was hype. I was happy for him,” Teague said about Hero (not Tyler) of the night, Andrew Wiggins. JT also said he’s not surprised about 3-0 start. “We spent a lot of time together.” + “I’m still a little rusty.” pic.twitter.com/Tm72aMp7KK

Mr. Teague continued. “KAT’s been carrying us these first two games being unbelievable so we needed to help him out a little bit.”

“[Wiggins] put the team on his back.”

+ Dodging pre-game sparks from getting in his hair! pic.twitter.com/9aFMCa20p6

Noah Vonleh is proving to be exactly the backup five the Wolves needed.

Jake Layman is super athletic. An excellent wing cutter that plays above the rim and can hit threes. Sign me up!

time for this one to come alive pic.twitter.com/CBj1Ent65h

KAT on some KD shit pic.twitter.com/3QulKb214R

As if the night could get any better, Karl posterized Kendrick Perkins on Twitter. You know, for an ex-player that talks an endless amount of shit, you’d think Kendrick could at least come up with some better material. He needs to hire a comedian.

His response to getting owned by KAT…

I’ll just borrow the money from Thibs or Jimmy to fix it! ‍♂️

JUDGES RULING: WEAK SAUCE. 1.7 out of 10. Not creative or funny. Those guys’ reputations are in a dumpster fire somewhere in Secaucus, New Jersey. To cite them shows a lack of internet awareness. Thibs might never make it back into the league and Jimmy would be the first person to criticize Perkins for having a terrible work ethic and not doing his research to hit Towns with an actual uppercut comeback. Maybe Perk should ask Karl for the money instead?

In the bonus: Full Press Conference from Drip Saunders

Man, Shabazz Napier and Treveon Graham dodged a bullet by being traded to Minnesota at the last minute instead of being stuck with Golden State. https://t.co/OMhdE12yDB