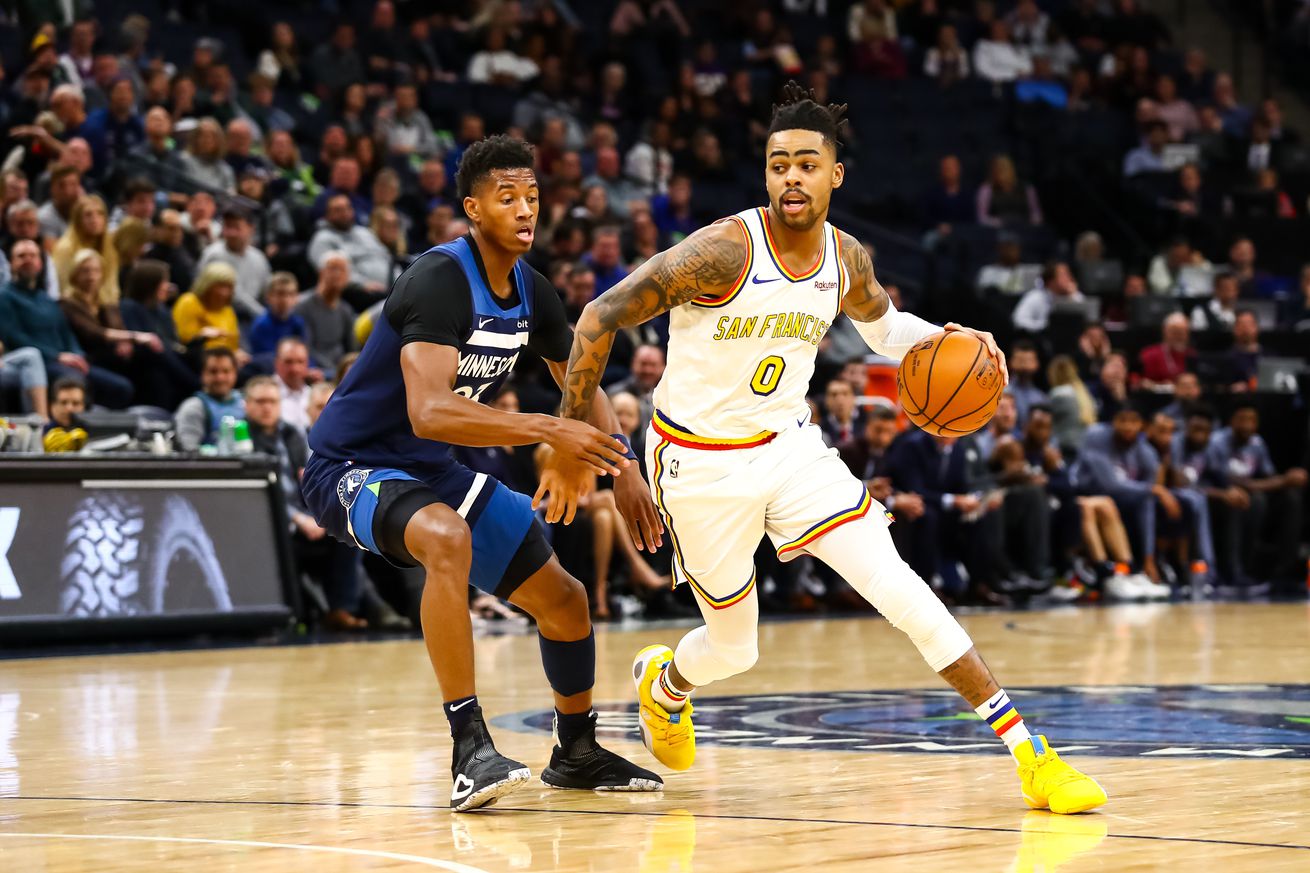 Wolves edge the Warriors in a slopfest.

We’ve seen it many, many times before, including the loss in Memphis two nights ago, and tonight we saw it again. Minnesota have always had a real problem with playing down to their opponents. When a team is devoid of talent like the Wolves are, they simply can’t afford to drop games against bad teams. And make no mistake, this Golden State Warriors team is bad.

So bad in fact that even on a night that the Wolves had 17 turnovers and missed nine free throws they still couldn’t climb over the line. Four quarters of sloppiness couldn’t seperate the two squads, but Minnesota was able to scrape over the line in overtime. When the final whistle blew and we all breathed a sigh of relief, the score was 125-119.

Much of that winning scoreline can be contributed to the ever-growing Andrew Wiggins. He continued to play efficient, aggressive basketball and finishing the night with 40 points (17-33 FG, 2-7 3PT). Without point guards Jeff Teague and Shabazz Napier, Wiggins was tasked with lead ball-handling duties for long stretches of the game — and he handled them superbly.

Maple Jordan was huge in the clutch, which has become a trend this season. None more so than the shot below. If you stayed in your seat after this game-sealing triple, you need to check if your legs are painted on.

WIGGINS PUTTING THE T-WOLVES ON HIS BACK. pic.twitter.com/v45gxM4We4

Outside of Wiggs, Karl-Anthony Towns had the quietest 20-point, 14-rebound night you’re likely to see. But Robert Covington and Josh Okogie stepped up in his place. Okogie finished with 14 points, 7 rebounds, 2 steals and a block in 31 minutes. Five of those points came in OT — a corner triple that gave the Wolves a two-point lead and a tip-in to save a possession not long after.

After a slow start to the season, Robert Covington was back to his defensive best tonight. He registered 5 steals and 3 blocks to go along with his 17 points and 11 rebounds. This clutch block was the pick of the bunch.

The Warriors are as depleted as they have been since their dynasty began back in 2015, with Kevin Durant gone and Steph Curry, Klay Thompson and Draymond Green out injured. However, they added another All-Star this summer and D’Angelo Russell reminded us all that he is exactly that. He absolutely torched the Wolves in this one. The point guard finished witha career-high 52 points to go along with 9 rebounds and 5 assists. All while shooting a blistering 19-37 from the field and 7-17 from long-range.

He was tearing shreds off the Timberwolves’ pick-and-roll drop scheme, hitting pull-up mid-range and 3-point shots by the dozen. He will get away with it because of the win, but Ryan Saunders looked out-coached at times tonight. He simply didn’t try hard enough to throw different things at Russell, allowing him to destroy the deep-drop pick-and-roll defense time and again.

Fortunately for the Wolves, he missed the final shot which would have sunk Minnesota. Which didn’t seem possible after watching him bury everything that came his way in the fourth quarter. He was quieter in the overtime period, but still dangerous as ever.

Minnesota didn’t play well in this one, but they come out of it unscathed and 5-3 on the season. However, they will need to be a lot sharper when they take on Denver on Sunday afternoon.