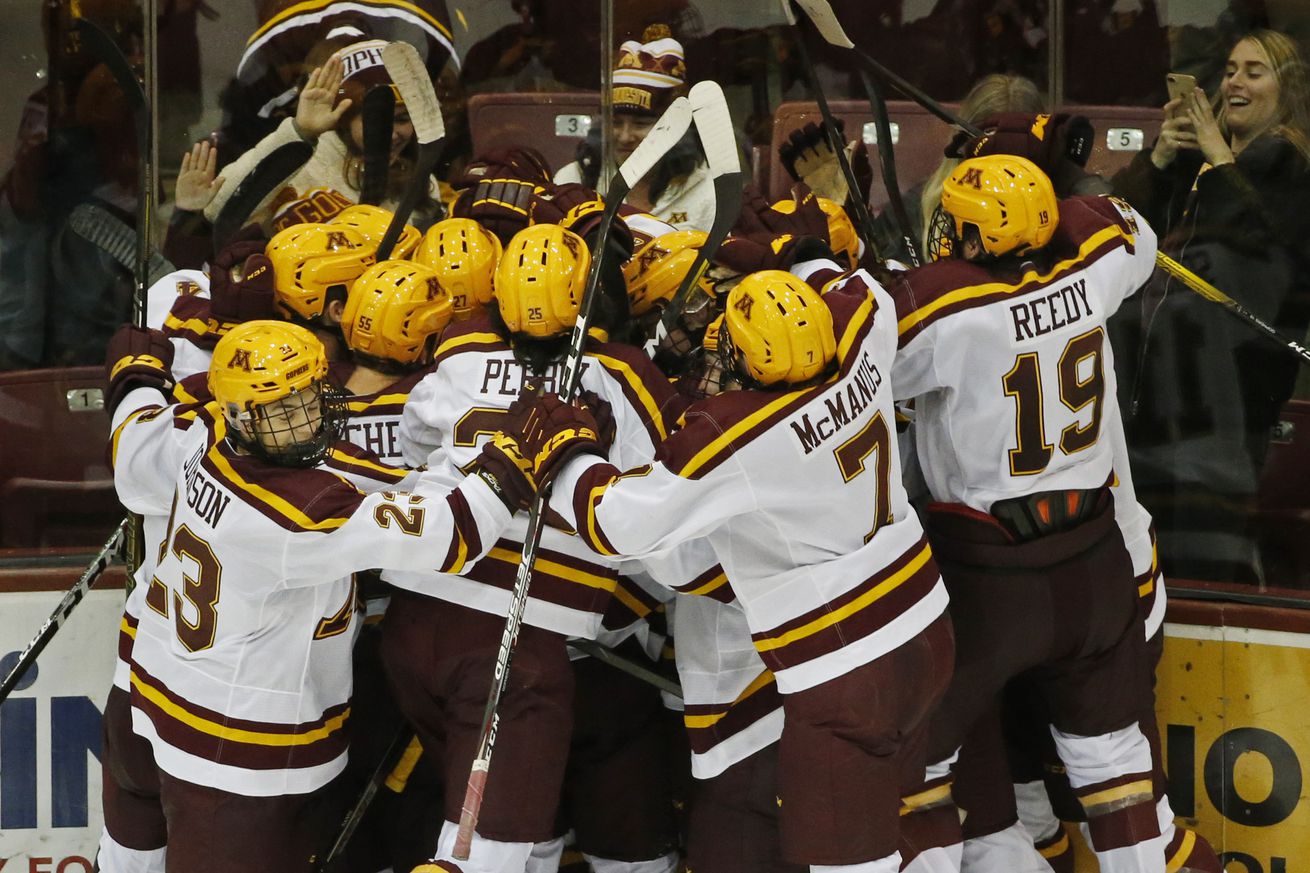 Both the Minnesota Golden Gophers men’s and women’s hockey teams will face ranked opponents this weekend for the first time this season. The men will play a home and home against in-state rival #8 Minnesota-Duluth while the women head out to Columbus for a series at #9 Ohio State Buckeyes.

The Gopher men come into the weekend riding a three game winning streak after sweeping the Niagara Purple Eagles last weekend. It took extra time on Friday night as Minnesota played poorly for a good chunk of the game but got a Sammy Walker OT game winning goal 47 seconds into the extra period to escape with a 3-2 win. Saturday night was tight once again but Minnesota would come out with a 4-2 win and see freshman goalie Jared Moe move to 2-0 for his career. Minnesota once again got spread out scoring as fourteen different Gophers scored a point on the weekend. Minnesota used their weekend to climb into the national rankings for the first time this season coming in at #20 in the latest USCHO Poll.

This weekend Minnesota faces their first in-state rival on the season with a home and home series against the Bulldogs. The defending NCAA Champs are off to a bit of a slow start this season opening with a 1-3 record. They lost their banner drop opener to Mass-Lowell before getting a one goal win Saturday night. Last weekend the Bulldogs headed into Madison and got swept by the Wisconsin Badgers by scores of 6-2 and 3-1.

Of course that doesn’t matter at all when these two teams get together. The Gophers and Bulldogs are 1-1-1 in their last three games against one another, but it comes at the tail end of a string of UMD dominance. The Bulldogs are 8-3-2 against Minnesota since the end of their version of the WCHA six seasons ago. A majority of those players and one coach from those teams are long gone, so its just a distant memory when the current versions of the Gophers and the Bulldogs step on the ice Friday night.

Minnesota will most likely keep their goaltender rotation going one more weekend. Junior transfer Jack LaFontaine is 1-1 on the season with a one goal loss to Colorado College and a one goal win over Niagara. Meanwhile freshman Jared Moe is 2-0 win wins each of the last two Saturdays. Gopher coach Bob Motzko appears willing to let the two try and sort out the ace themselves so expect to see LaFontaine Friday night in Minneapolis and Moe Saturday night in Duluth. Neither player has faced the Bulldogs.

Meanwhile UMD will go with Hunter Shepard in net. The senior goaltender is 1-1-1 in three games against the Gophers, owning a 3.53 GAA and 56 saves (.848 save percentage). Not amazing numbers. He was much better last season in backstopping the Bulldogs to the NCAA title going 25-14-1 with a 1.91 goals against average and a .925 save percentage. So the ability to shut down a team is definitely there.

Offensively both teams will look to spread the scoring around. Sammy Walker leads the Gophers with three points and two goals on the season, but NINE other Gophers all have two points on the year. The Walker/McLaughlin/ other line is the biggest scoring threat for the Gophers but it appears goals can once again come from all four lines this season.

UMD returns a series of players who led the Bulldogs to their third title a year ago. Noah Cates and Nick Swaney each lead the team with three points and two goals on the year. Stud defensemen Scott Perunovich and Dylan Samberg also both have three points for the Bulldogs through four games. The Gophers will need to account for all four of those players on the ice this weekend and more.

When: 7PM Friday and Saturday

The Gopher women look to stay unbeaten both on the season and in WCHA play at they head to Columbus for a series at #9 Ohio State. The Gophers are coming off of a home sweep of St. Cloud State last weekend by scores of 3-0 Saturday and 4-2 on Sunday. The Taylor Heise, Alex Woken and Grace Zumwinkle line has the hot hand last weekend as they combined for ten points with Zumwinkle leading the team with four. Heise’s sixteen points on the season lead the Gophers. Minnesota’s defense continues to lead the nation in scoring from the blue line helped by Emily Brown’s pair of goals and one from Olivia Knowles. Brown was given the WCHA defenseman of the Week award for her three point performance. Senior goalie Sydnee Scobee has continued to shoulder the entire load for the Gophers as Alex Gulstene did not dress for a fourth consecutive weekend due to injury. Scobee made 34 saves on 36 shots faced in the series and earned a shutout on Saturday. She will once again play both games this weekend for Minnesota.

The Buckeyes have struggled a bit this year, yet are still the #9 team in the country. Ohio State is 4-2-2 on the season and 2-2-2 in WCHA play. Last weekend the Buckeyes tied Minnesota State twice but lost both conference extra points to the Mavericks. The Buckeye coaching staff will have a bit of a reunion this weekend as head coach Nadine Muzzerall and assistants Emily West and Milica McMillen all played for the Gophers. Ohio State has eight Minnesota natives on the roster as well.

Ohio State will play sophomore Swiss goaltender Andrea Braendli in net. She had a successful freshman season where she went 16-10-2 and recorded an impressive .939 save percentage.

On offense the Buckeyes are led by junior Emma Maltais. She has 12 points on the season to lead the team and her five goals are also tops on the Buckeyes. Mound native Liz Schepers is second on the team with nine points as well as Tatam Skaggs. Defeneman Jincy Dunne is one Minnesota will need to watch. One of the best defenders in the county Dunne scored twice against Minnesota in a 3-2 win over the Gophers at Ridder Arena last season.

Friday’s game faces off at 5PM, while Saturday’s game begins at 2PM. Live free audio and stats can be found on gophersports.com.