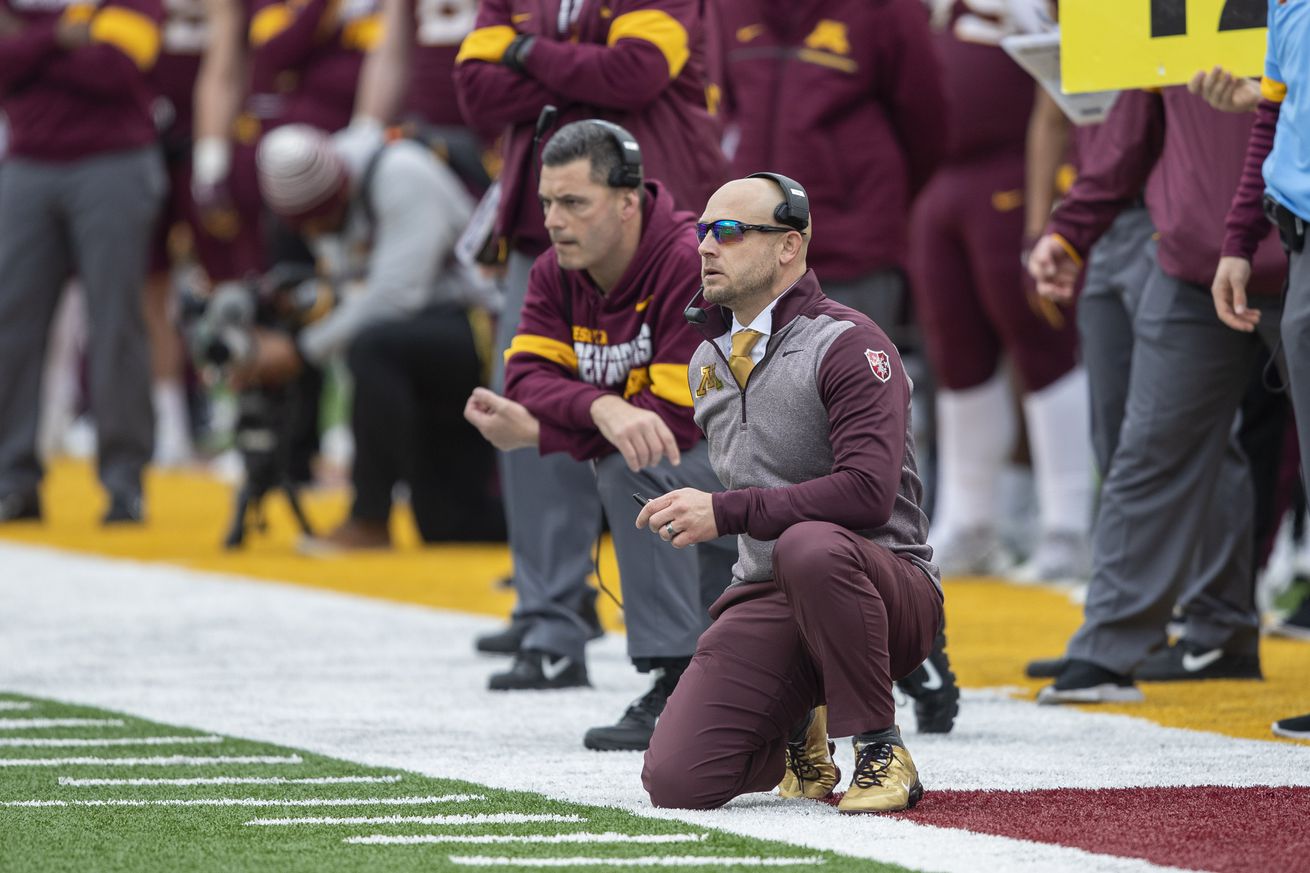 Taking stock of the Gophers’ 2021 recruiting class so far

It’s been a strange summer for recruiting, with the NCAA effectively shutting down campus visits due to the ongoing spread of COVID-19. The Minnesota Golden Gophers haven’t had a recruit verbally commit since May 30, but head coach P.J. Fleck and co. have been dealt a handful of decommitments in the months since. It’s certainly going to be a challenging process moving forward for coaches and recruits alike.

The Gophers currently have 15 players committed in a 2021 recruiting class that ranks 22nd nationally and sixth in the Big Ten, according to 247 Sports. We’ll break it down position by position to give you an idea of where things stand now and how the shape of the class could change between now and December.

Fleck and co. are done here. Athan first committed March 27, 2019, and has been rowing the boat ever since, even through the offseason change at offensive coordinator. If I’m not mistaken, Mike Sanford Jr.’s first phone call was to Athan after he was hired in January.

I think Fleck and co. are done here, as well. Minnesota did make the top six for Edwardsville, Ill. running back Justin Johnson in June, but I’m not sure how hard the coaching staff is still recruiting him or if his offer is committable at this time.

I would not be surprised if the Gophers add another receiver. We all know how Fleck and co-offensive coordinator and wide receivers coach Matt Simon like to stockpile pass catchers. The loss of summer camp season due to COVID-19 has hampered their efforts in this regard, as Fleck prefers to see receiver recruits work out in person before extending an offer.

Four-star athlete Sam Jackson’s decommitment (again) hurts. Minnesota’s coaching staff was going to give him a chance to compete at quarterback, even though they like him better at wide receiver. Ultimately that wasn’t enough for Jackson and he opted to take his chances in West Lafayette, where Purdue head coach Jeff Brohm has assured him a shot at quarterback and the comfort of being their only quarterback recruit in this class.

As long as Geers is in the boat, I believe Minnesota is done here.

Offensive line recruiting continues to be an uphill battle for Minnesota. Offensive tackle Riley Mahlman, the state of Minnesota’s top recruit for 2021, is committed to Wisconsin. Totino-Grace’s Joe Alt was believed to be torn between Iowa and Minnesota, but ultimately decided on Notre Dame. Four-star offensive tackle Cameron James was a huge recruiting win for Fleck and co., but until the Gophers start sending more Minnesota Movers to the NFL, it’s going to be a challenge for them to compete with more established programs for highly sought-after recruits.

Name to Watch: Eric Wilson. He is not a high school recruit, but a transfer out of Harvard. If you’ll recall, Wilson is a Minneapolis native who chose Harvard over Minnesota back when Tracy Claeys was head coach. Once Claeys was fired, Fleck made a last-ditch effort to flip Wilson, but the Crimson won out. Now, after playing in 20 games for Harvard over the last two seasons and being named Second-Team All-Ivy League in 2019, Wilson has announced he plans to transfer for his final year of eligibility after graduating next spring. Expect Fleck to make another push.

There is still work to be done here, as Minnesota saw decommitments from defensive tackle Albert Regis and rush end D’Marion Alexander in May and June, respectively. With that said, Eastern and Booker are both well worth their scholarships as prospects with high ceilings.

Names to Watch: Minneapolis North defensive end Davon Townley has seen his recruiting heat up over the summer, receiving nearly a dozen Power 5 offers over the last three months. Fleck and co. are believed to be in a good spot with Townley, who happens to be Tyler Johnson’s cousin. The Gophers are also in the top three with Florida State and Missouri for the services of Indiana defensive end Kyran Montgomery. There isn’t much steam between Minnesota and any defensive tackle prospects at the moment, but the coaching staff did recently extend offers to Virginia defensive tackle Marquise Brunson and JUCO defensive tackle Jalen Williams.

Fleck and co. are holding out hope for Rosemount standout Jake Ratzlaff, who originally committed to play hockey for Minnesota before his freshman year of high school. But now Ratzlaff is torn between playing college football or playing hockey in the NHL, a decision that has been complicated by the indefinite postponement of June’s NHL Draft. If he opts to play football, Ratzlaff says he will choose between Minnesota and Wisconsin.

The Gophers have a pair of four-star studs in Dickerson and Ortiz, but with the late June decommitment from cornerback Tamarion Crumpley, there would seem to be a spot open for another defensive back to complete the quartet.

Names to Watch: Minnesota has entered the sweepstakes for Michigan cornerback Maxwell Hairston, who was originally planning to commit on Aug. 6 but recent interest from Minnesota, Purdue, and Kentucky has forced him to reconsider that timeline. The Gophers also found out this week they are in the Top 4 of Mississippi cornerback Justin Walley.