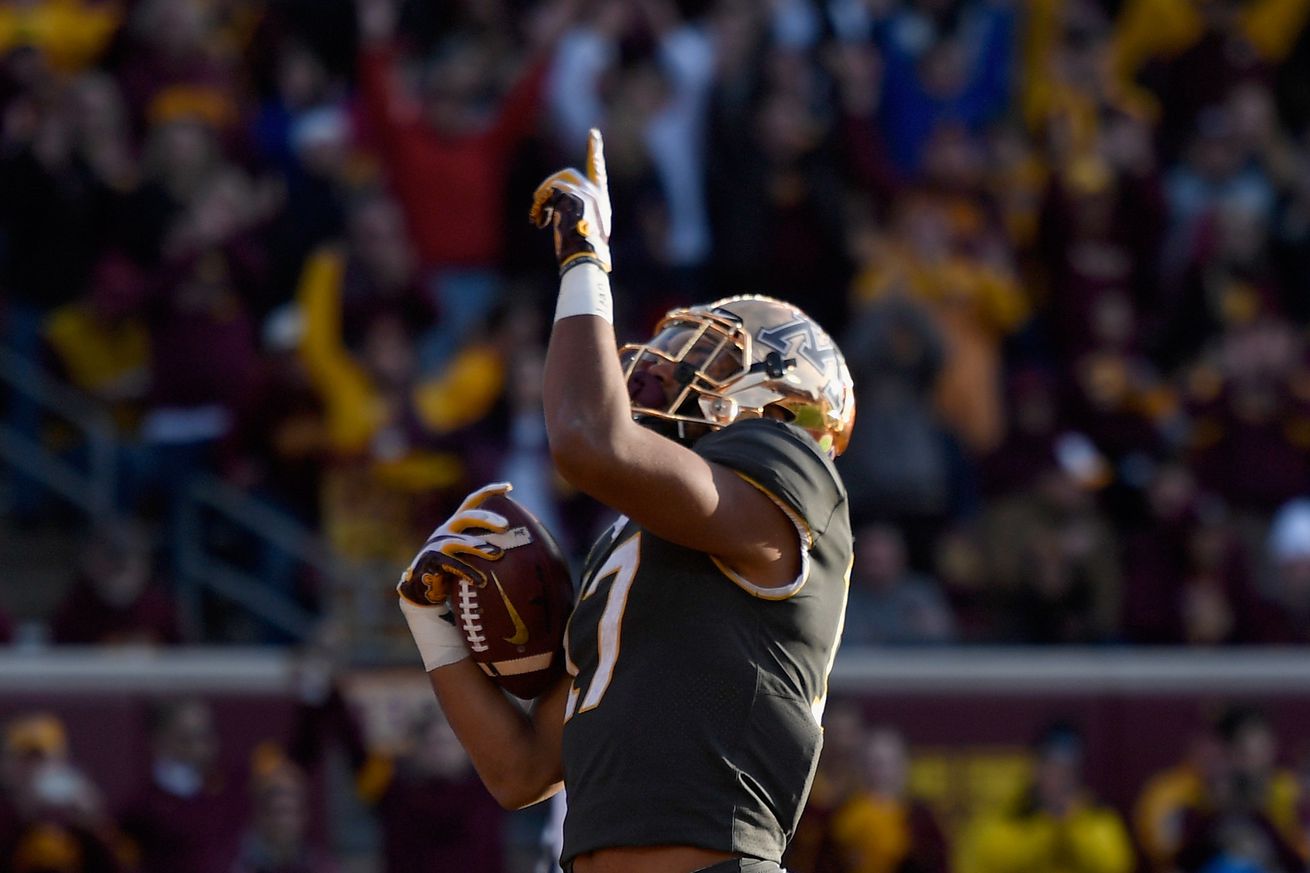 Saturday was another good day to be a Gopher

The Minnesota Golden Gophers enter their second bye week of the season feeling good after a 52-10 rout of the Maryland Terrapins, improving to 8-0.

The Robb Smith Revenge Tour rolls on. What a difference a new defensive coordinator makes. The team that torched the Gophers for 315 rushing yards and 42 points a season ago were stopped in their tracks on Saturday, held to 79 rushing yards and 10 points. Joe Rossi’s defense is playing at a high level as Minnesota enters the final stretch of the season, allowing an impressive 6.75 points per game against their last four Big Ten opponents.

Antoine Winfield Jr. The curse has been broken! Winfield survived the Maryland game for the first time since 2016. He made his presence known on the first drive of the game, finding himself in perfect position to intercept a tipped pass from Terrapins quarterback Tyrrell Pigrome. That interception set up the Gophers’ first scoring drive and they never looked back.

Mariano Sori-Marin and Braelen Oliver. Head coach P.J. Fleck declared injured linebacker Kamal Martin a “game-time decision” earlier this week, but I was not holding my breath for him to even dress for the game, let alone see the field. Lo and behold, Martin was in street clothes for the game, but the Gopher defense did not miss a beat. In fact, sophomore linebacker Mariano Sori-Marin got the starting nod and proceeded to lead the team with a career-high eight tackles. Redshirt freshman Braelen Oliver also two tackles, including a key third down sack in the first half. Depth at linebacker has been a concern, but the underclassmen answered the call.

Coney Durr. Durr has quietly been the Gophers’ most effective and consistent cornerback all season long. Pro Football Focus even turned their attention to the redshirt junior cornerback earlier this week, touting Durr’s 40 percent forced incompletion rate, which is the best in the country. But Durr failed to fly under the radar on Saturday, returning an interception 72 yards for a touchdown against the Terps in the second quarter. With Maryland driving to the Minnesota 30, Durr’s pick six swapped a potential 21-7 score for an extended 28-0 lead.

ICYMI: Coney Durr put this one on ice late in the first half.@CD16ERA | @GopherFootball pic.twitter.com/QKsGahEGbE

Rodney Smith. The senior running back notched his fifth straight game with at least 100 yards rushing and, with at least five games left to play, is now 166 yards shy of reaching 1,000 rushing yards in a single season for the second time in his college career. But Smith made history on Saturday, becoming the program leader in career all-purpose yards with 5,117.

The Minnesota offensive line. When all is said and done, we may look back on that bye week as the turning point in the season. Since that bye week — which followed a rough start to the season for the Gophers’ offensive line — the Minnesota Movers have paved the way for a ground game averaging 253 rushing yards per game, and they’ve only allowed one sack over their last four games. Saturday was no different, as the Gophers rushed for 321 yards as a team and kept quarterback Tanner Morgan clean with zero sacks.

Seth Green. Several of our commenters have been wondering, “Where art thou, Seth Green?” Well, the Gophers’ Jack of All Trades was back to vulture touchdowns after being used sparingly through the first seven games, tallying two scores against Maryland.

The back-ups ain’t so bad. True freshman quarterback Jacob Clark is now 1-for-1 in his career after attempting his first collegiate pass, a 39-yard reception to Harry Van Dyne. True freshman running back Treyson Potts followed with his first career touchdown.

P.J. Fleck’s use of timeouts. I am nitpicking here, but Fleck may need to change his best when it comes to his use of timeouts. To his credit, the Gophers always seem to play well immediately after a timeout, but using them early and often in games may eventually come back to bite them.

Nothing. And please, resist the urge to “Well, actually” me in the comments. We’ve spent enough years focusing on the negative. The Golden Gophers are 8-0 for the first time in 78 years, and I don’t think we’ve appreciated that enough. Seriously, soak this up.