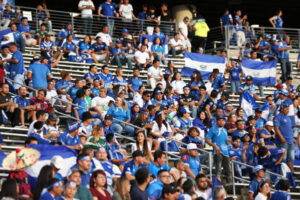 PODCAST – What’s up Internet? This week on Last Word SC Radio, Matt and Dan are back. We pod live as the 2021 Concacaf Gold Cup finishes up. We preview the Gold Cup Quarterfinals, focusing on the USMNT and where their individual player stonks are at.

In the Round Table, we do MLS and Gold Cup Pick ‘Ems.

During this episode, we talk about Venezia FC and Ted Lasso. Here’s the links to the stuff we referenced during those discussions.

Last Word SC Radio is American Soccer podcast, covering mostly MLS, as well as the USL, NWSL, and U.S. Soccer. We are a part of Last Word on Sports Media and an affiliate member of the Beautiful Game Network. You can subscribe to the podcast on iTunes and many other podcatchers, along with lots of other great content from other Last Word on Sports outlets.

Matt Pollard is the Managing Editor of Last Word on Soccer and an engineer. When he’s not watching soccer or at work, the Colorado transplant enjoys skiing and hiking all over the state. The LA Kings will always be his first sports love, though MLS didn’t exist at the time. Once called the Shakespeare of LWOS, he covers the LA Galaxy and Colorado Rapids. Like the Galaxy, he too was handcrafted in LA.

Rachael Kriger is a Senior Editor at Last Word on Soccer. She is the lead writer for the Seattle Sounders, U.S. Women’s National Team and NWSL. Hailing from Moscow, Russia, she resides in Pittsburgh, Pa., home to the Riverhounds. Rachael is a big fan of her home country’s national teams and cried when Russia beat Spain in the World Cup Round of 16. However, Rachael has to admit that basketball was her first love and still keeps in contact with that sport through coaching.

Daniel Sperry is an Editor at Last Word on Soccer. He covers mainly Sporting KC and U.S. Soccer for LWOS and discusses San Francisco Giants baseball elsewhere. He was born and raised in Northern California, hence his love for Bay Area teams. He currently resides in the KC Suburbs with his incredible wife and energetic puppy. Outside of sports and writing, he loves a good stout and nature, whether that is hiking, camping, canoeing, birding, or some activity with all four.