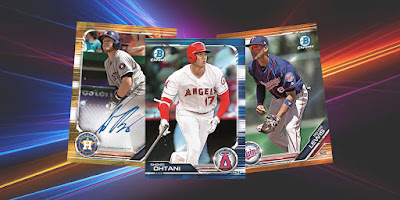 Tomorrow is the annual release of Topps’ Bowman Chrome product. Each year there is a Bowman Draft and Bowman Chrome offering during the baseball card collecting calendar. As one would expect, the former highlights some of the top picks in the amateur draft while the latter picks up the slack on some of the others. For the Minnesota Twins, Chrome provides and interesting opportunity this time around.
While collecting baseball cards is traditionally a hobby, it’s also now a robust gambling and investor market. From ripping open a box looking for the next hot player or holding onto a card in hopes of it being the next Mike Trout, there’s money to be made and this isn’t just a child’s corner store pickup anymore. That isn’t more apparent anywhere than within the checklist of a Bowman product. These are all players that are defined as prospects or up and coming. Their elusive first autographs can be the most coveted cards in the hobby.
For Minnesota the signers this time around are Jorge Alcala and Jhoan Duran. It’s an intriguing duo in that both were acquired during the 2018 season in trades. Both have now spent a year within the organization, and the arrows for each are trending straight up. Alcala has earned his big-league call although he’s yet to debut, while Duran is still working exclusively as a starter topping out at Double-A.
There’s a difference between baseball good, and baseball card good, so let’s explore that within the parameters these two have provided us.
First and foremost, pitchers are a risky investment. The volatility of injury and sample size is truly one you must cope with. Then there’s the reality of a given market, and no one will argue that Twins players would be more coveted than the likes of Dodgers or Yankees. Beyond that you then get into a merit-based discussion.
Alcala is the fireballer acquired in exchange for Ryan Pressly from Houston. He comes from an organization with good developmental traits and is now in one that represents a similar level of execution. Starting didn’t work out well for Alcala this season, but since moving to relief he had a 0.98 ERA and .479 OPS against in 18.1 IP. The 18/4 K/BB is indicative of a guy that should rack up strikeouts, and his promotion to the big leagues during a Postseason run suggests that Minnesota sees him as a future difference maker as well.
The downside here is that Alcala is already 24 and he appears to be destined for the pen. While the opportunity to become a substantial asset for the Twins is real, the upside in the card collecting community is all but nullified. Josh Hader is one of the best arms on the planet, but his cardboard will never be at a premium because of the market and position he finds himself in. Alcala’s ink should be affordable and that will make him fun to collect, but this isn’t a guy that’s going to appreciate substantially.
When fan favorite Eduardo Escobar was traded the clubhouse went pretty sour. He found out on TV first, and it was among the initial moves that had the Twins parting out pieces as sellers. Duran headlined the return and has looked the part of a solid starting arm since coming over to Minnesota. He’s not a top 100 prospect and finds himself in the middle of the Twins top 10, but that doesn’t negate the production we’ve seen.
Still just 21-years-old, Duran reached Double-A Pensacola during 2019. His 3.76 ERA across two levels is plenty respectable, but the 10.6 K/9 is what jumps off the page. He can push it into the upper 90’s and sits comfortably in the mid-90’s. Homers have never been an issue for him, and we’ll see how that changes with the live ball at Triple-A and the big leagues, but this is an arm that could make its way into the Minnesota rotation by next year.
There isn’t ace-type upside here, and he too will have the designation of playing for the Twins, but a mid-rotation starter with upside is a pretty good bet. Duran would need to go on some sort of hot stretch or have a record setting year to vault himself into significant hobby-lore, but the ability for a short burst jump is certainly there. Another guy that should have very affordable autographs, he’s someone that you could see slight gains following a strong showing immediately after his promotion. More baseball good than hobby good, upside does have a bit of presence with him.
Make sure to check out 2019 Bowman Chrome at your local hobby shops when it drops on September 18. Along with these prospects, Minnesota has a few rookie autograph offerings as well as one of Nelson Cruz’s few depictions in a Twins uniform.