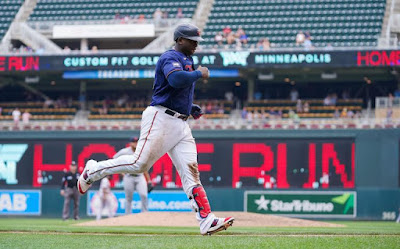 Early on this season Miguel Sano might have been the biggest mess he’s even been during his big league career. There was an inability to time a fastball, and he was a detriment to the Twins lineup. That has changed, and he’s back to being who he’s always been.

Rewind to the Twins slog through April and May to find a slumping Miguel Sano. The team was bad, and Sano owned a .675 OPS at that point. His playing time was reduced as he was splitting reps with Alex Kirilloff at first base. Eventually he’d begin to ride the pine even more often, and there was clamoring from fans to DFA him and pass him down to the St. Paul Saints.

Fast forward to where we are now. Sano isn’t having some sort of revolutionary resurgence, but since June 4 he’s posted an .815 OPS with 22 extra-base hits (including nine home runs) in 47 games. The batting average is respectable (.256) for a power hitter, and while the on-base percentage isn’t where he’d like it (.321) the number is passable.

All season long the problem has been timing more than anything else. His strikeout rate is 35.6%, or below his career average, and substantially below the 43.9% he posted in 2020. Sano’s hard hit rate is above his career average, and basically in line with some of his best seasons. Unfortunately, his barrel rate is at a three-year low, and that again is indicative of point of contact. Sano has dropped his whiff rate back to 2019 levels however, and his CSW% is right below his career norm.

When Miguel Sano squares one up it goes a LONG way pic.twitter.com/ZrojBDkP3n

What we’re seeing is the same player that Minnesota paid $30 million over three years for. The problem is that the peaks and valleys have been more pronounced, but at this point you’d have hoped the organization had a better idea as to the player they have. Sano is a former top prospect, but not in the vein of a Guerrero Jr. or even Buxton. Miguel’s tools have always been plus-plus power and a plus-plus arm. Yes, he was a young Dominican shortstop, but it quickly became apparent he wouldn’t stick there. He’s passable at third base, but the frame has always profiled better at first base, a position he’s actually adequate at.

The .923 OPS Sano posted in 2019 is very likely a mirage given his tendency to be inconsistent. His .859 OPS as an All-Star in 2017 makes a lot more sense. The average will always lag behind, but he actually commands the zone well and his hard contact output will always trend towards a slugging outcome. Given the run, he’s a good bet for 25-30 homers a year, and as a guy you can put in the bottom half of a lineup, that seems like a decent asset.

It’s very clear that Miguel Sano isn’t a foundational cornerstone. He can absolutely be worth what the Twins front office decided to pay him though. Committing to him on a regular basis rather than second guessing what he is through slumps doesn’t make a ton of sense. He’s the type of player that isn’t going to benefit from extended time off. Not all prospects pan out the same way, and while this isn’t the 99th percentile of where you’d like development to be, that might not be the worst thing any ways. If Sano was the best version of himself, paying him $30 million might not have happened in order to send him elsewhere for another hopeful return.