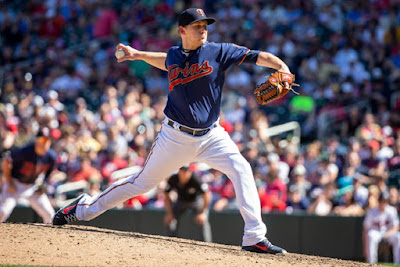 Remember when the Minnesota Twins had a terrible bullpen and it was one of the worst in baseball? That’s how the 2019 Major League Baseball started, and aside from Taylor Rogers, Rocco Baldelli was chucking darts when turning to his relievers. At the trade deadline the Twins were supposed to upgrade their staff, and while they got one burned on one deal, they did accomplish that through another. More than anything though, Minnesota has benefitted from internal talent rising to the top. Against big names in the Yankees pen, could the Twins really have an advantage?
You know the names in New York. Aaron Boone will be able to turn to the likes of Aroldis Chapman, Zack Britton, and Adam Ottavino. Throw in the strikeout rates of both Chad Green and Tommy Kahnle as well and you’re looking at quite a daunting group. Boone’s relief corps is battle tested, veteran laden, and built to propel them through a few weeks in October. There’s zero denying the talent and ability of this group.
Statistically speaking, Minnesota has been better, however. We’re splicing the season into a two-month sample, but since the trade deadline the Twins owns the second-best bullpen in baseball (trailing only the Tampa Bay Rays). At 4.0 fWAR, Minnesota is nearly two full wins clear of the trio tied for third (Athletics, Dodgers, and Yankees). WAR can be a misleading compiling numerator, but the Twins have generated their result in just 214.1 IP. That’s 50 innings shy of the first place Rays (who they trail by just 0.1 fWAR), and 25 innings below the output of the Yankees. Quality in less quantity is something we’re seeing develop in this space.
This isn’t your Minnesota arms of yesteryear development either; there’s no smoke and mirrors happening. Baldelli’s relief corps has a 10.2 K/9 (top 10) and the lowest walk rate in the sport (2.27). It’s not a ground ball dominated approach, but a 13.3% HR/FB effort is the 6thlowest in baseball (and 3rd best among Postseason teams). Although six other units have posted lower ERAs, Minnesota’s league leading FIP substantiates that this performance is for real.
When poking holes in performance there is some potential cause for concern. The Twins are in the bottom five when it comes to surrendered hard hit rate, and while their BABIP is in the top third, it’s not unexpected following hard contact. Thwarting that though, is the quality of offerings sent up to the plate. Minnesota leads baseball with a 34.7% chase rate. Hitters expanding the zone is also accompanied by a whiff rate of 13.2%, or 5th best in baseball. Opposing batters make contact just 73.3% of the time (9th lowest) but given the first two inputs, they’re often attacking what would be described as a pitcher’s pitch.
Breaking it down to singular players, Tyler Duffey is second in baseball in terms of fWAR since the trade deadline. Before giving up a homer to Jorge Soler in his final outing of the year, he’d gone 23.2 IP (dating back to July 28) without surrendering a run. He gave up just 11 hits in that span and owned an insane 40/5 K/BB. Taylor Rogers and Zack Littell have also been top 30 relievers since the deadline, and reflect the group being a strong sum of its total parts.
It’s hard to suggest that the emergence of strong performances from Twins arms is as beneficial as what New York can turn to. Similarly, to the rotation questions for the Yankees, Minnesota’s stance is more of opportunity than favorability. That being said, it’s very clear the skill gap here is minimal at best and things could swing either way. Credit must be given to the development of the Twins arms, and the position they now find themselves in because of it.
A few years ago, the Chicago Cubs gave up Gleyber Torres in an exchange to grab a World Series on the left arm of Aroldis Chapman. Boone is going to have his horses ready to go, and New York can willingly shorten a game with relievers. Although the Twins don’t have an Ottavino or Britton, they do have a Duffey and Rogers that look to provide the same value with the generic brand label.
When dissecting much of this series it becomes abundantly clear how close these two opponents are. The bullpen being as such would’ve been a laughable suggestion a few months ago, but here we are.