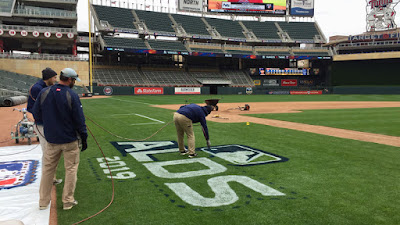 For years I’ve suggested that the goal of a Major League Baseball team should be reaching the Postseason. The ultimate prize is a World Series ring, but you can’t accomplish that without making it into the final tournament. A run of Postseason berths provides excitement that often trumps a single World Series ring, and outside of the casual fan boost, attendance generally follows that trend. Plenty of unfounded frustration has been flung towards a 101-win Twins team, but thankfully we have the Dodgers to bring us down to earth.
After a sweep at the hands of the New York Yankees in the American League Division Series plenty of Twins fans were sought searching for more. There’s been hot takes and wild opinions thrown out left and right. Analysis of a season is now being done through a three-game window, and hindsight has become everyone’s favorite tool. Instead of understanding a good team, that has nothing in common with historical matchups, beat the Twins in a short series there’s a need to find justification for the outcome.
Forget that the organization had no idea they’d lose Michael Pineda, there wasn’t enough starting pitching. More was supposed to be added at the trade deadline despite the best arm being moved having a full no trade clause and being hit around in his first Postseason outing. The front office didn’t spend enough in the winter (which was a fair argument), but still churned out a ridiculous 101 wins. Take your pick, there’s plenty of avenues available to gripe that may make you feel better about how one of the best seasons in Minnesota history ended.
Then again, you could go ahead and think about the Los Angeles Dodgers. Los Angeles has won 90 games every year since 2013 and haven’t had a losing record since 2010. They have picked up seven straight division titles and reached the World Series twice. Last night they fell to a Washington Nationals team that owned a run differential over 100 points less than theirs. You could say they should have acquired more pitching, but then you remember Buehler, Kershaw, and Ryu. You could say they should have spent more, but then you remember they were in the top five to begin the year.
What we saw take place in the Division Series round is complete pandemonium. We’re a Tampa Bay Rays victory over Gerrit Cole and the Houston Astros away from complete chaos in the Championship round. That’s not to suggest the Postseason is a complete crapshoot, but it absolutely solidifies the reality that nothing in October is certain. The Dodgers and Astros had no business facing a game five. They were on a collision course to meet in the World Series. Instead, here we are.
As Derek Falvey and Thad Levine look to build a consistent winner, their goal will be in the form of projectable success. While owning one of the best farm systems in baseball, and now having a Major League roster flush with controllable talent, they’ll look to stack the deck in their favor for years to come. Rather than sacrificing high level assets for a fleeting hope or additional percentage points, they’ll be calculated and well thought out in pushing for consistency.
There are avenues for handwringing to take place, but angst about the Twins not having a better showing in their first season of a competitive window is hardly the place to bring it out. Division titles will get old after four or five are strung together. Hopefully a Championship Series or two culminates in a ring, or shot at one, but the reminder has been put in front of us. Nothing is guaranteed in the Postseason, and very little goes as planned. Get there often, position yourself well, and let the chips fall where they may.