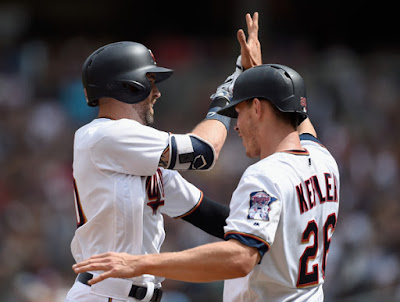 As analytics have crept into the game of baseball and taken a foothold as the chief form of evaluation, players from all different eras rail against the game in its current state. The game has definitely changed to cater towards the exceptional athletes that play it today, and the sport has taken notice as well. Unwritten rules have forever (and will always) be part of baseball, but there’s a certain aspect still waiting to be phased out.
The idea that baseball polices itself has long been one that has held weight. As the game has adapted to use slogans like “Let the kids play” and adopted rule changes at bases and the plate, it’s clear there’s an emphasis on keeping these elite athletes on the field of play. With that in mind, it’s beyond time to put an end to the retaliatory pitch.
In last night’s Twins and Rangers game, outfielder Jake Cave swung on a 3-0 pitch and lined a single into the outfield. It was a 13-6 game and in the top of the 9th inning. Cave immediately apologized to pitcher Shawn Kelley upon reaching first base, and he appeared to have lost track of the count. Kelley overlooked the acknowledgement and after going 3-0 to the Max Kepler, plunked him on the arm.
Discussion from the booth, from Roy Smalley and Dick Bremer, immediately turned to that act as retaliation for Cave’s transgression. In a game that Minnesota was blowing out Texas, he had the audacity to swing his bat. Kelley couldn’t find the zone for a second straight batter, and then quit competing to hurl a ball into the arm of the Twins centerfielder. A sport that now has rules in place to protect its players, watched as a pitcher hurled a pitch into a batter, simply because he was upset.
I have no problem with avoidance of the mound, looking presentable on the field, carrying yourself with a level of self-respect, or any number of lesser unwritten rules. I do have an issue with the idea that a pitcher gets to throw a projectile at a batter any time they feel scorned or upset. While wearing a pitch isn’t the end of the world, taking a 90-mph baseball to any part of your body doesn’t feel good, and can certainly open the door to a more substantial injury.
There’s a level of respect shown to an opponent taking one base at a time or giving away pitches in a blowout game. That’s not a necessity though and is something the winning team does to show mercy. Expecting that to be the practice, and then reacting negatively when it doesn’t take place is lunacy. Minnesota wouldn’t have been afforded the good graces of the Rangers simply striking out should they have mounted a 9th inning comeback. Deciding when the game no longer is worth playing in the middle of it is not for any one person to opine. On top of that, this instance stemmed from a guy who clearly stated his intentions and felt bad for what he considered a misstep.
At the end of the day it isn’t that Jake Cave got his teammate Max Kepler hit. That’s what happened, but it was the idiocy of Rangers pitcher Shawn Kelley that decided an attempt to injure an opponent was fair response to him failing at his job. The easiest way to avoid having your feelings hurt in defeat is to steer clear of situations where you cause self-embarrassment. Last night the Rangers were an abomination, and then they doubled down on that fact in how they carried out the 9th inning.
Hopefully the Twins find no need to keep the beanball war going tonight, but I certainly hope every dinger that leaves the park ends with a bat flip landing mere feet from the mound and the pitcher that offered it up.