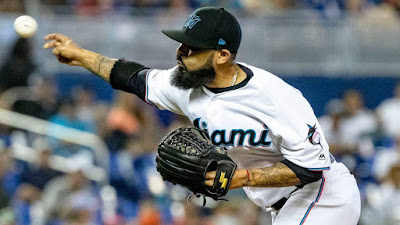 For weeks it’s been apparent that the Minnesota Twins need bullpen help. As we’ve gotten closer to the trade deadline the certainty that moves would be made has only become more clear. Tonight while in the midst of a battle with the Chicago White Sox, Derek Falvey was working the phones and landed RHP Sergio Romo from the Miami Marlins.

Romo was a free agent this offseason and signed with Miami on a one-year, $2.5 million pact. He was someone I liked for the Twins but the front office decided to stand pat after the acquisition of Blake Parker. Romo was abysmal to start the season for Miami but has been lights out of late, and his dominant slider remains as good as it’s ever been.

When you’ve been doing this for as long as Romo has, and without ever being a velocity pitcher, it’s the offspeed stuff that must work. Sergio throws his slider nearly 60% of the time and it’s continued to be an incredible offering. His slider posts an RPM of 2852 which is 9th best among sliders in baseball this season.

Falvey obviously had to part with an asset in trade, and choosing Lewin Diaz makes a lot of sense here. He’s a 22-year-old that posted a sub-.600 OPS at Fort Myers last season. Having put in significant work to get his body right this winter, he’s having a breakout campaign with 19 HRs and an OPS north of .900 split between A+/AA. That’s really where the good news for the Twins and Diaz ends however.

Lewin would need to be added to the 40 man roster this winter or be subject to the Rule 5 draft. He went unprotected and unchosen last year, but that wasn’t going to happen after the results this year. In that scenario the Twins lose him for nothing. He’s a great defender at first and a nice power bat, but he’s also behind at least Miguel Sano, Brent Rooker, and Alex Kirilloff for major league reps at first base in the not-so-distant future.

This wasn’t a one for one trade either. Minnesota also got back 2018 5th round pick Chris Vallimont from the Marlins. He’s pitching at Low-A currently as a starter and the righty has been a high strikeout, low walk hurler in his young pro career. He too is 22-years-old but is not subject to 40 man necessity yet and gives the Twins depth on the mound, where they need it more. Reports have also suggested Minnesota picks up a PTBNL in the deal.

It would be hard to see a Diaz for Vallimont swap as anything but a win for Minnesota. They get a more usable asset and the expiration date is pushed out. If the assumption was that Diaz could be packaged to net a bigger return that’s one thing, but you’d have to imagine Falvey explored those options as well. This isn’t going to be the Twins only move, and probably not even their only move for the pen. As a first deal though, they smashed this one out of the park.