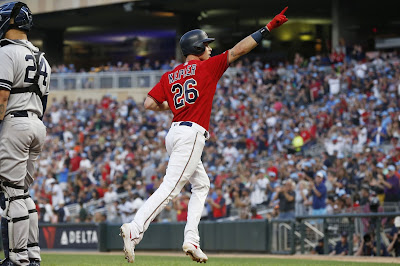 Arguably the most exciting game the Minnesota Twins have played in nearly a decade, the home team dropped a 14-12 affair last night (err this morning) at Target Field. It’s in these last few games against the Oakland Athletics and New York Yankees that two very real truths have been exposed. For the duration of 2019 it will be how each storyline unfolds that ultimately determines the fate of the season.
First and foremost, the Twins are good and can hang with anyone in baseball. There was a narrative earlier this year that Rocco Baldelli’s club was only beating bad teams. While “teams with a .500 record” is an inexact science given the fluidity of records, Minnesota is playing at something like a 90-win pace against other teams in or around Postseason contention. Yes, they’ve beat up on bottom feeders, but they’ve also more than held their own against stiff competition.
As of today, both the Yankees and Athletics are slotted into American League Postseason positions. The Twins split their four-game series with Oakland posting an even run differential over the set. In five games against New York, Minnesota owns a 2-3 record and has come up just two runs short of an even run differential. With a rubber match game looming tonight, this split could get even tighter.
In winning games against good teams it’s been the offense that has gotten the job done. Although the lineup has slumped from the blistering pace it started 2019 on the Bomba Squad is still pounding extra-base hits at a healthy clip. Over the course of a full 162 game schedule this collection is far too good to stay down for long. As pitching, both starting and relief, regresses towards statistical parallels it’s the bats that should be expected for a continued rebound.
On the mound we’ve seen a confirmation of what we already know. In the past week Minnesota’s bullpen has blown late leads on no less than four occasions. Cody Stashak worked important innings during his MLB debut last night, and Lewis Thorpe was there the night before. Kohl Stewart was tasked with keeping a big game tied in the 10th, and any number of arms have been called upon from the Rochester pipeline.
Derek Falvey knows full well that he needs to get this team relief help. Rocco Baldelli is playing Russian Roulette on a nightly basis, and the result continues to be Band-Aids on a bullet wound. The front office can’t afford to skimp on an ok veteran in the pen, this roster needs difference makers. While the long-term vision remains important, wasting a team and opportunity this good by making a safe move can’t be the plan of action.
We’re on a collision course with two pivotal points in the Minnesota schedule. A week from now the trade deadline rears its head, and in just a few days the opposition gets incredibly light. Minnesota knows how this book has begun, but it’s on them to write the final chapters.