The Falcons no longer viewed John Cominsky as a fit, waiving him after three seasons Friday. But a fourth of the NFL remains at least somewhat intrigued by the young defensive lineman’s potential. Eight teams made waiver claims for the fourth-year veteran, Field Yates of ESPN.com tweets. 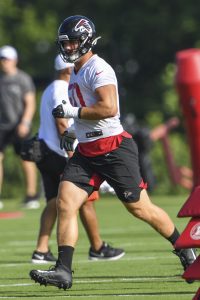 Cominsky is now with the Lions, who hold the No. 2 spot in the offseason waiver order. While the Jaguars (No. 1 on the waiver list) did not try to claim him, the Commanders, Colts, Browns, Texans, Cardinals, Vikings and Bengals did.

A 6-foot-5 defensive lineman out of Division II Charleston (West Virginia), Cominsky only factored in prominently on defense for the 2020 Falcons, who used him on 398 defensive snaps as mostly a backup. Otherwise, the Cleveland-area native has played just 113 non-special teams plays as a pro. The Falcons took Cominsky in the 2019 fourth round (135th overall); Tuesday’s claim volume makes it fairly clear other teams believe some of the potential that led the former Mountain East Conference Defensive Player of the Year to the Senior Bowl and 2019 Combine remains.

As a senior at Charleston, Cominsky totaled 16.5 tackles for loss and three sacks. This potential has not yet translated to the pro level, with the ex-Falcon finishing the 2020 season with a sack and 10 pressures. The Falcons used him on 13 defensive plays last season. But the 285-pound defender offers some versatility, as a defensive end and D-tackle.

The Lions will aim to see if the small-school product can carve out a role under second-year defensive coordinator Aaron Glenn. If he cannot, Tuesday’s waiver summary points to a third chance for the contract-year defender.