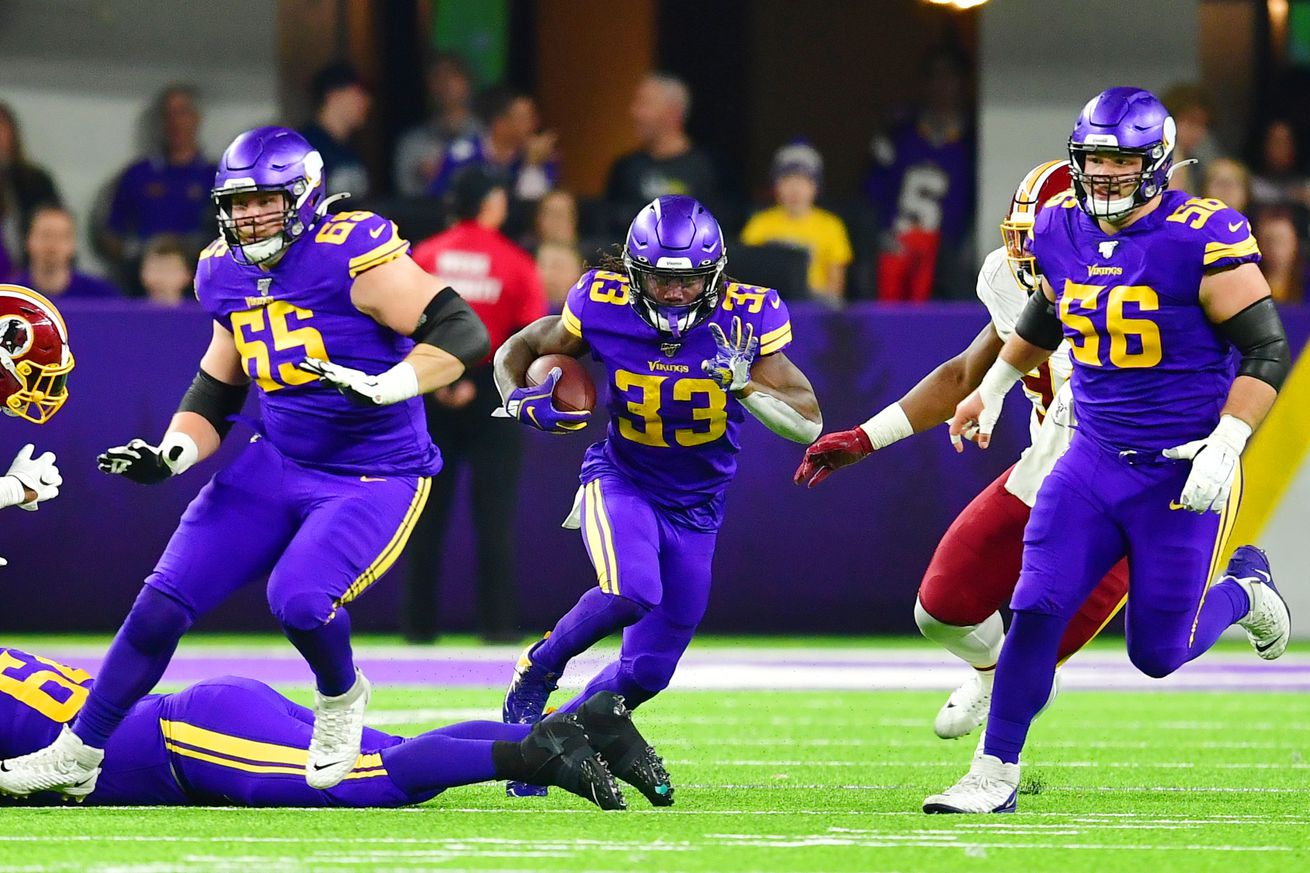 Who gets the nod for the Thursday night win?

It’s Game Ball time, ladies and gentlemen! With the Minnesota Vikings knocking off the Washington Redskins on Thursday night by a final score of 19-9, it’s time to decide which player had the best performance of the week. Kirk Cousins has won three of these in a row, but will he be able to hold off some pretty strong challengers to secure another?

Let’s take a look at this week’s candidates.

Dalvin Cook, RB – It wasn’t Cook’s biggest game of the year, numbers-wise, but he still had an outstanding all-around performance. He carried the ball 23 times for 98 yards, just the third time this year he’s been held under the century mark, and also caught five passes for an additional 73 yards. He also accounted for the game’s lone touchdown, and had a big reception on a screen pass to set that score up.

Kirk Cousins, QB – Like Cook, Cousins didn’t put up quite the numbers that he did over the previous three weeks, and he had no touchdown passes in this one. Still, let this marinate for a bit. Cousins completed 23-of-26 passes on Thursday night. In the first half, he was 12-of-13 with one throwaway. In the second half, he was 11-of-13 with one throwaway and one drop by Cook on a checkdown. So, literally every time he actually attempted to complete a pass to a Minnesota Vikings’ receiver, the ball hit the receiver in the hands. I don’t care who you’re playing against, that’s awfully impressive.

Stefon Diggs, WR – For the third week in a row, Diggs caught seven passes. He has 21 receptions over the past three weeks after having just 16 in the first five games. For the third week in a row, he also went over 100 yards, and even though he didn’t have a touchdown on Thursday and fumbled for the fourth time this year (the most by any non-quarterback in the NFL), he got the job done despite not having Adam Thielen on the opposite side of the field.

Anthony Harris, S – Harris didn’t light up the stat sheet on Thursday, as he was only credited with two tackles, but he did make what was arguably the biggest defensive play of the evening. After the Vikings failed to convert a 4th-and-short from their own 34-yard line in the third quarter, Harris snagged a Dwayne Haskins pass that was intended for Terry McLaurin for an interception to end Washington’s last significant scoring threat of the night.

Danielle Hunter, DE – The other big defensive play of the evening came from Hunter, and came very early on. After the Diggs fumble, Hunter came steaming around the edge and got to Case Keenum, knocking the ball out of his hands for a fumble that was recovered by Shamar Stephen. That was his only sack of the evening, giving him eight on the season and 48 for his career, which will now stand as the record for most sacks by a player before age 25. (Hunter turns 25 on Tuesday, so he can’t extend the record further.)

Eric Kendricks, LB – It wasn’t his biggest game of the season, but Kendricks continues to be the most consistent player on the Minnesota defense from week-to-week. He led the team in tackles once again in this one with seven, and had another pass defended as the Vikings held the Redskins to just 216 total yards of offense on the evening.

That’s who I’ve got, folks. Who gets your vote for this week?