The Vikings have promoted Andre Patterson to assistant head coach, per a club announcement. This marks Patterson’s second promotion of the year after the defensive line coach was crowned as a co-defensive coordinator. 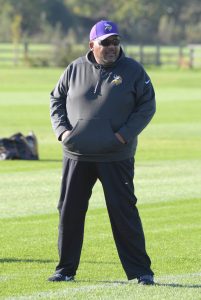 Patterson is on his second stint with the Vikes. He first joined in the late 1990s and circled back to the club in 2014. Since then, he’s taken on more and more responsibilities. Patterson has also helped the Vikings place ninth in in sacks (283), third in rushing touchdowns allowed (76), and fifth in opponent yards per game (332.0) since 2014. Now, he’ll share the headset with Adam Zimmer while working even closer with head coach Mike Zimmer.