As expected, the Vikings have officially ruled wide receiver Adam Thielen out for Thursday Night’s matchup against Washington, according to Tom Pelissero of NFL.com. Thielen pulled his hamstring in the Vikings win against the Lions on Sunday. 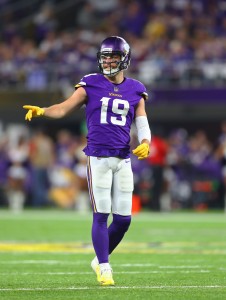 On the heels of their victory against Detroit, Minnesota stands at 5-2 and in prime of NFC playoff position. Quarterback Kirk Cousins has had an erratic season thus far, but over the past few weeks has been fantastic. He aims to build upon that success next week, but it will have to come without his best best receiver.

Thielen currently leads the league in receiving touchdowns with six and has accrued nearly 400 receiving yards as well. This success is nothing new for Thielen, who has been one of the league’s best wideouts over the past two seasons. While things will obviously be difficult, Stefon Diggs, the team’s number two receiver, would be the number one option on a number of teams around the league.

Furthermore, previous reports suggested the team is hopeful that Thielen will be able to return relatively quickly. It definitely helps their cause that their next opponent, Washington, has been one of the worst teams in the league.