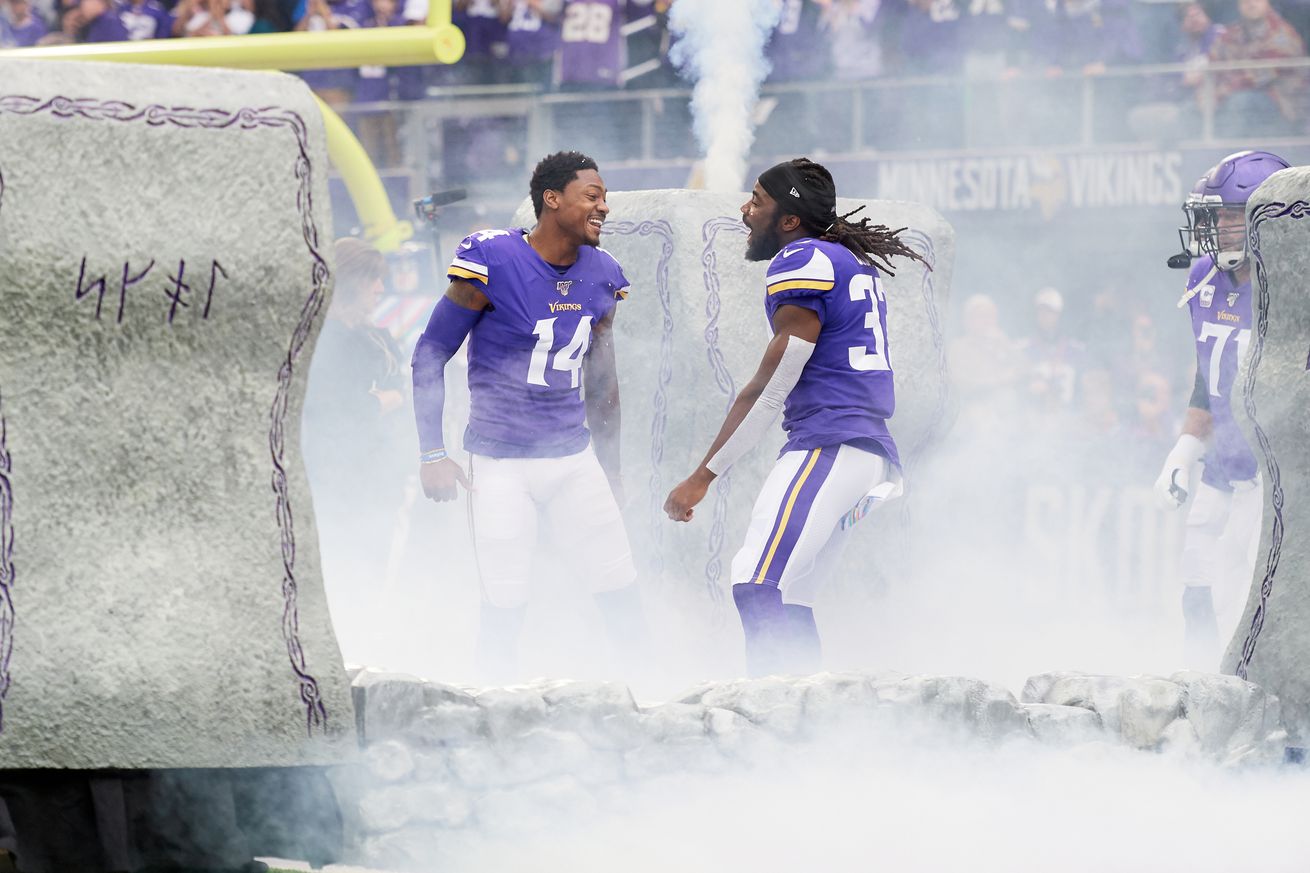 How can you follow along with the action on Thursday night?

There’s still time to get your tickets for Thursday night’s game between the Washington Redskins and Minnesota Vikings from Stubhub!

We are getting closer to kickoff of this week’s Thursday Night Football game from U.S. Bank Stadium, featuring the Washington Redskins taking on your Minnesota Vikings. We want to make sure that everyone has the ability to follow along with the action tomorrow night, however you want to take it all in, and that’s what we’ll be doing with this post. So, let’s get to it.

Given that this is Thursday Night Football, we have a special start time for our festivities, with kickoff slated for 7:20 PM Central time. There’s no need for a coverage map for this week, because Redskins/Vikings is the only game in town. The game will be aired on FOX, which is KSTP-9 in the Twin Cities. If you’re not sure whether or not you’re in the coverage area for this week’s game, just ask yourself whether or not you have FOX.

(SPOILER: You have FOX.)

For our friends in the United Kingdom, this game will be shown on Sky Sports, and specifically on Sky Sports Action. It’s going to be a pretty late night. . .or an early morning. . .for this one, as kickoff is slated for 1:20 AM Friday morning British time.

For our men and women in uniform serving overseas, the American Forces Network will be showing this one live. . .largely because they really can’t ignore it. . .on AFN Sports. Coverage starts at 0100Z on Friday morning, which works out to 0200L on Friday for viewers in Central, 0430L on Friday for fans in Afghanistan, and 0900L on Friday for everyone in Japan and Korea.

If you’re going to be traveling, if you simply prefer radio to television, or if you’d like to try to sync the radio feed up with the television broadcast, you can find a Vikings Radio Network affiliate in your area. Just click on the link to find the full list of partners across the Midwest.

If you prefer satellite radio, or if you’re too far outside of the Vikings Radio Network area to get the game there, you can tune to Sirius Channel 83 or XM Channel 226 to get the feed from the Vikings Radio Network. I thought the game was also going to be on SiriusXM NFL Radio, Channel 88, with the national feed from Westwood One, but it’s not being listed on the SiriusXM site anywhere. If you want the more “neutral” feed for whatever reason, you can probably give it a go and see if it’s on there. If you’ll be using the SiriusXM online app, the Vikings’ permanent home there is Channel 819.

According to Football Zebras, the officiating crew for this Thursday night contest will be led by Carl Cheffers. The Vikings have not seen Mr. Cheffers and his crew since 2017, when his crew officiated the team’s most recent shutout, a 16-0 victory over the Green Bay Packers at Lambeau Field.

Once again, the weather won’t be playing a factor in this one, as it will be taking place inside the comfy confines of the NFL’s best stadium. If you’re going to be participating in any pregame festivities, it’s going to be a bit brisk out there. Our friends at WeatherNation aren’t forecasting any precipitations, but temperatures in the Twin Cities area are going to be in the low 40s all day, dipping below that right around kickoff.

If you have it, this week’s game will be available on Amazon Prime, so that’s one legal streaming alternative for you to enjoy. You can also check out Fubo.tv for over 100 channels of live, streaming sports. They also have a free seven-day trial so that you can check out the service for yourself.

The other legal streaming alternative is NFL GamePass.

As always, we won’t be tolerating links to illegal streaming sites here at The Daily Norseman. Don’t post them or even hint at them. If you want an illegal stream that badly, do the search for it yourself. . .somewhere else.

That should be everything you need to keep track of all the action from U.S. Bank Stadium on Thursday night when your Minnesota Vikings host the Washington Redskins for Thursday Night Football. We hope to see a bunch of you here for the Game Threads as well, with the first one coming up on the site just before 6:30 PM Central time.