The opening of NHL Free Agency is always a manic frenzy of rumors, with a mix of some surprises and lots of hype only to result in (insert player here) re-signing with his team.  And as KFAN‘s Pat Micheletti said, “A lot of teams are going to overpay players and end up regretting the deals they made.”  You didn’t have to look far to see the ‘stupid money’ he was referring to as the 32 clubs around the league doled out over $732 million dollars on Day 1 of free agency.  Speaking of some of those ‘stupid money’ deals, the Oilers signed Cody Ceci to 4-year deal that will pay him $3.25 million a season, or the Chicago Blackhawks committing to Jake McCabe for four years at $4 million a season.  With money to burn and clubs desperate to show their fans and their respective owners they’re serious about winning common sense seems to be thrown to the wind as these deals are made.

The Minnesota Wild, having just bought out the remaining 4-years of the contracts of Ryan Suter and Zach Parise felt compelled not only to fill holes on the roster but to also spend some of that $29 million in cap space by signing 35-year old defenseman Alex Goligoski to a 1-year, $5 million contract.  The contract includes a full no-trade clause.  Goligoski has spent the last 5 seasons with the Arizona Coyotes where he had 3 goals, 22 points in 56 games.  The Grand Rapids-native brings experience and a puck moving game where he will likely slot into the team’s Top 4 along with Jared Spurgeon, Jonas Brodin and Matthew Dumba. While the 1-year deal is an ideal length given the club’s cap situation, I do not like the full no trade clause which means unless Alex agrees to it the team will not be able to trade him for other assets at the deadline.  I feel like we gave him a premium amount of money given where he is at in his career, in my opinion is then you don’t give him a full no trade clause.  Yet the deal is done, so hopefully we don’t have regret about giving him that security.  Goligoski will be wearing #47 for the team.

Michael Russo of the Athletic reported that there may be an agreement to extend that contract at a reduced cost some time around January.  I am not sure I like the sound of that as I want to see the the club to start transitioning to younger players like Calen Addison and others.

It is expected the team will likely look for another defenseman to fill out their remaining hole left by Carson Soucy being taken in the NHL Expansion Draft by the Seattle Kraken.  With restricted free agents Kirill Kaprizov and Kevin Fiala still yet to be signed there is an importance to spare as much room as they can. 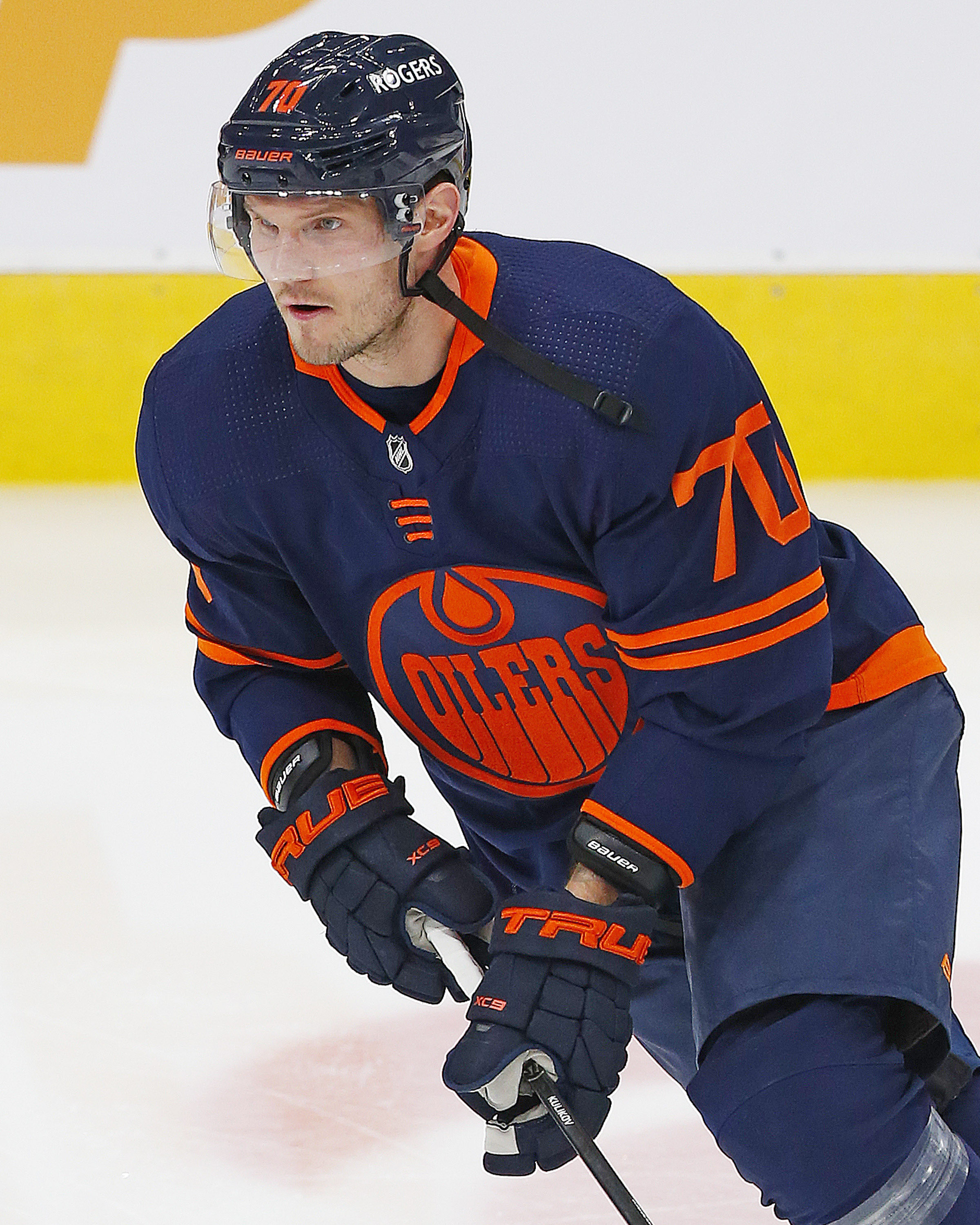 Minnesota then made a later evening addition by signing 30-year old defensemen Dmitry Kulikov to a 2-year, $2.25 million per season.  The left shot, Kulikov had just 4 assists and 28 penalty minutes in 48 games. The twelve-year NHL’er has bounced around the league a bit, where his offense has waned in recent years as he focused on being more responsible in his own end.  He brings a bit more size at 6’1″, 204lbs and at times has shown an element of feisty to his game, but he is not a player who plays who will be confused for a big hitter.  Is it an attempt at adding a fellow Russian for Kaprizov to bond with?  Maybe.

Yet he’s mobile, is a capable puck mover and he has a bigger shot which he doesn’t use as much as he used to.  The signing gives the team another experienced depth defenseman to most likely play on the team’s 3rd pairing.  I am kind of ambivalent about the signing.  One would think they would still want to add a bigger defenseman who has more of a physical presence to his game.  While the cap hit is small and now the team has about $20.5 million left in cap space.

As Kulikov is 6’1″ and Goligoski is 5’11”, the team could use a defenseman with more size who plays with a bit more of an edge to his game.  So who is available after a crazy day of signings across the league? (last year’s cap hit shown in parentheses)

So not a lot in free agency, but perhaps the team will look to make a trade instead.  Seattle took a lot of defenseman during the expansion draft and perhaps they’d look to part with one like a Jeremy Lauzon.  The Wild are losing Ian Cole who signed a 1-year, $2.9 million deal to play for the Carolina Hurricanes and he was a player who seemed interested in returning to Minnesota. 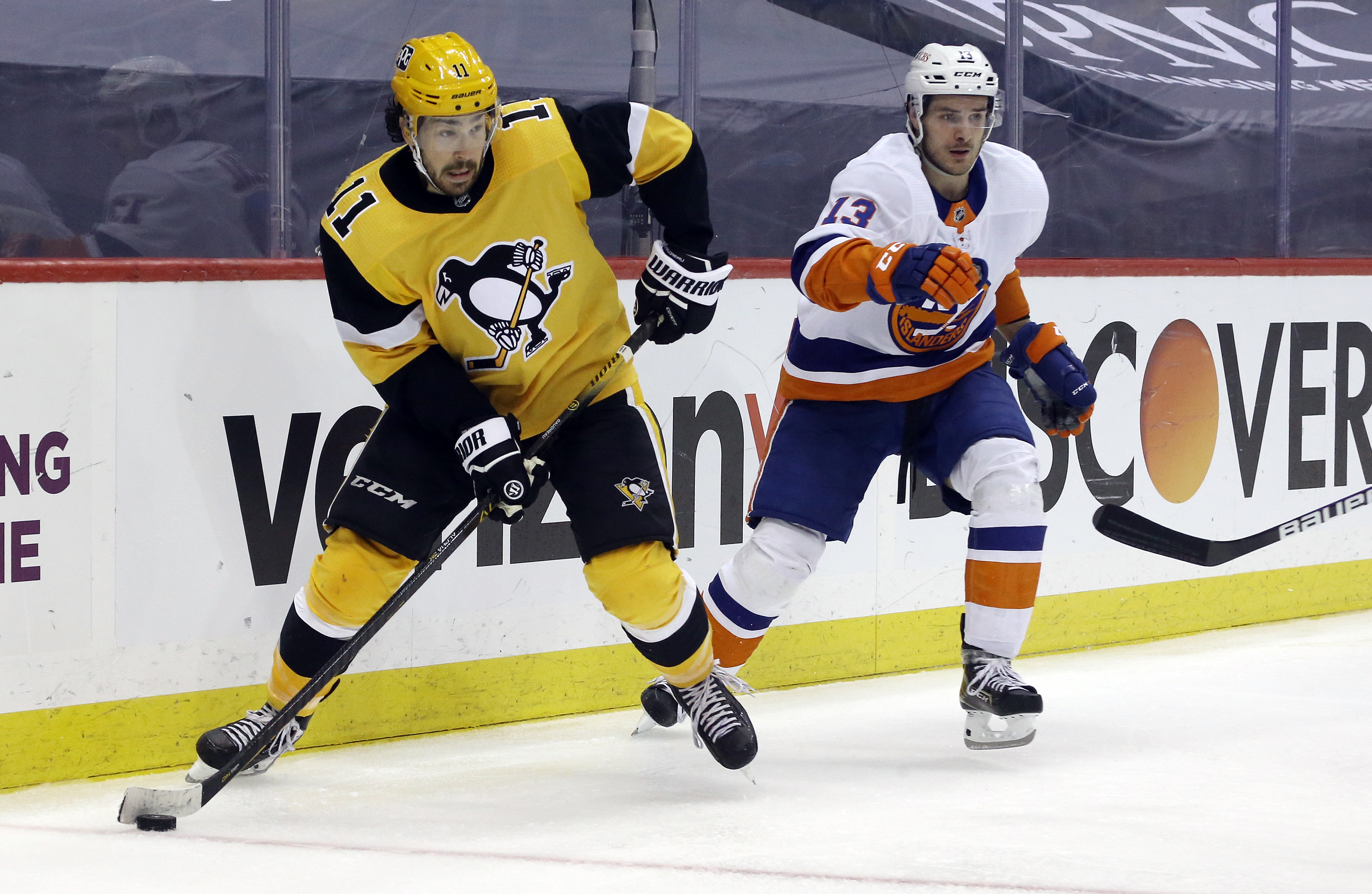 The Wild also added a depth forward in 28-year old Frederick Gaudreau to a 2-year, $2.4 million pact.  A right-shot forward who brings speed, physical play was in 19 games last season with the Pittsburgh Penguins where had 2 goals, 10 points.  The other thing he hopefully brings to the table is the ability to win draws where he went 53.7% on his faceoffs.  That is important for a team that was 28th in the NHL where they only won 46.5% of its draws last year.

Gaudreau is also familiar with Wild Head Coach Dean Evason as the two worked together when Evason was the bench boss with the Milwaukee Admirals.  During those 3 seasons, Gaudreau was one of the Admirals best players and used in all situations where he invariably earned the trust of Evason in the process.  The Bromont, Quebec-native will never be a big point producer at the NHL level, but his high tempo, physical game will be something Wild fans haven’t seen since we traded Cal Clutterbuck to the New York Islanders.  He can play either on the wing or at center so he’s versatile and will probably get time on the penalty kill.  I like the signing of Gaudreau who I think gives the team more speed and dose of physical play that I think helps drive opponents crazy.  Look at how players like Vegas’ Ryan Reaves and William Carrier cause all kinds of havoc and perhaps that spurred the team to want to have a bit more snarl up front.

That still leaves spots available for the team to promote from within players like highly touted prospect Matt Boldy and Marco Rossi.  However you still want depth in the bottom 6 and the team has other options in minor league journeymen like Will Bitten or Kyle Rau or drafted energy players like Brandon Duhaime or Connor Dewar. 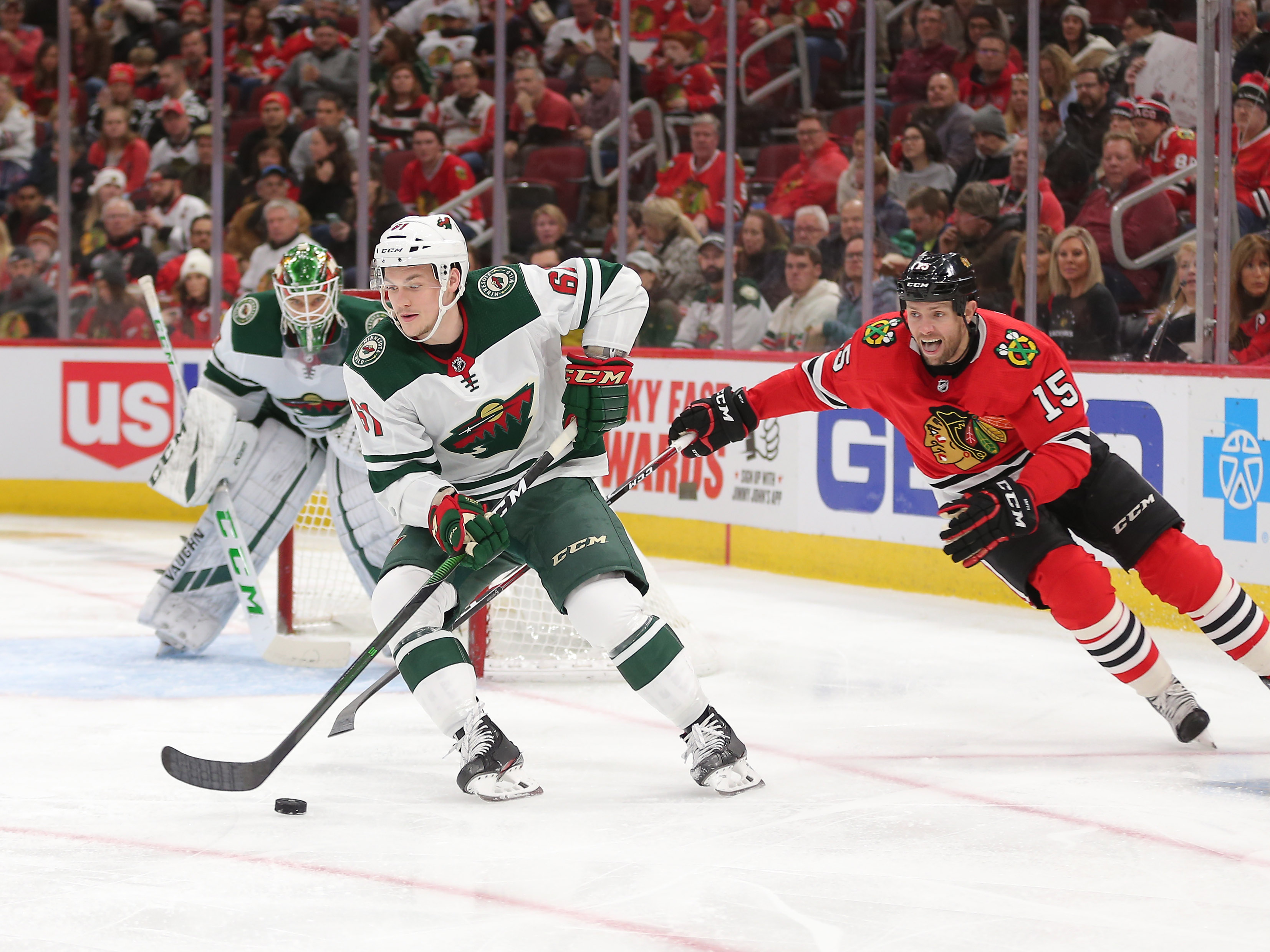 The Minnesota Wild decided to cut loose promising 24-year old right-shot defenseman Brennan Menell by trading him to Toronto for a conditional 7th round pick in 2022 if he plays at least 30 games with the Maple Leafs next season.  The Woodbury-native spurned the Wild last year by taking his game to the the Kontinental Hockey League where he played for Dinamo Minsk.

Menell was an absolute workhorse for Minsk where he was one of the top scoring defenseman in the KHL with 5 goals, 38 points in 47 games and regularly logging over 25 minutes a night.  The decision certainly seemed to throw Wild General Manager Bill Guerin for a loop.  In 2019-20, Menell was ‘AHL Defenseman of the Year’ after a 5 goal, 47 point in 57 games that unfortunately was cut short by the pandemic and the league suspending its season.  As the 2020-21 NHL season was about to open, after talking with team officials he seemed to be unhappy with the way the organization saw his future role so he took his game to Europe.

He returned this spring as his contract with the team was about to expire, as he hoped to be given a one-way contract for a price reportedly around $800,000 on a one-year deal.  The team couldn’t or wouldn’t give him that one-way contract and so talks between the two stalled before the Wild decided to trade him to Toronto instead.  It is a sad finish to one of the better underdog stories in team history.

Menell was an undrafted free agent defenseman who was playing for Lethbridge in the Western Hockey League.  I had the chance to interview Menell the day before he signed that contract with the Wild who had given him a tryout at their annual prospect camp.

If there ever was a player who took ‘the road less traveled’ it was Menell who played AAA hockey in Chicago before advancing to the Western Hockey League.  But as you can read in the interview, he just never gave up and kept working hard and eventually was noticed by the departed Wild’s analytics gurus Alexandra Mandrycky and Andrew C. Thomas and was given an invite to prospect camp.  At camp, he impressed the team and played well at the Traverse City Prospects Tournament and was tendered a contract.  It was a pretty cool story on a number of levels.

Now after having played 3 seasons with the Iowa Wild and spent the time, energy and effort developing that player the team couldn’t part with a one-way deal and decided to just sever ties with the trade to Toronto.  In my opinion its sad and unfortunate.  Sad they couldn’t get over last year where the Wild was annoyed by him bolting for Russia to play a full season and playoffs as opposed to playing a much shorter season and no playoffs in the AHL.

I realize that Menell was discovered under Chuck Fletcher‘s time as GM, but with the Wild’s cap crunch that will take place in the next 3 seasons after 2021-22 and he would’ve seemed like an affordable, promote-from-within option.  Obviously the Minnesota Wild felt otherwise and I think its short-sighted given the fact the team is going to need affordable options.  While I realize Menell is not a big player nor does he play a physical game, they seem to value skilled puck-moving defenseman and he fits that description.  So why jettison him?

My guess its Guerin’s strong belief in loyalty, no doubt another hallmark of what he learned while playing for Lou Lamiorello with the New Jersey Devils who instilled that kind of culture with that organization.  While I wish for the best for Menell, a player who I think paid his dues and did everything expected of him and more but I hope the Wild don’t end up regretting that choice to trade him like they probably did when they let players like Anton Khudobin and Zbynek Michalek for nothing.  Especially on day where goaltender Filip Lindberg signs with the Pittsburgh Penguins, those memories of missing out on potentially valuable young players seems not appear so far fetched.

The team also signed two more defenseman for depth for the Iowa Wild’s roster in Joe Hicketts and Jon Lizotte to a two-year deal and one-year pact respectively.  Hicketts, the 5’8″ left-shot defenseman from Kamloops, Alberta played for the Grand Rapids Griffins the last 6 seasons.  He had a goal and 18 points in 32 games with Grand Rapids last year.  Joining Hicketts is former St. Cloud State alum Lizotte, the Grand Forks, North Dakota-native who played for Wilkes-Barre / Scranton last season.  The 6’0″ defenseman had 3 goals, 9 points and 39 games.

The move gives Iowa some much needed depth now that it has parted ways with vets like Menell, Matt Bartkowski, Louie Belpedio and Josh Atkinson.  These players will join recent college-free agent signee Riese Zmolek and 2020 2nd round pick (39th Overall) Ryan O’Rourke since he did play in over 20 games with Iowa this season.  O’Rourke earned solid reviews from Iowa Wild bench boss Tim Army who felt the youngster showed a lot of poise for being an 18-year old playing in his first professional season.  Addison is also a possible option to join Iowa, but he may be promoted to the big club right away after having a strong rookie season with the ‘baby Wild.’

What did you think of the Wild’s free agent signings?  Tell us on Twitter at @CreaseAndAssist!