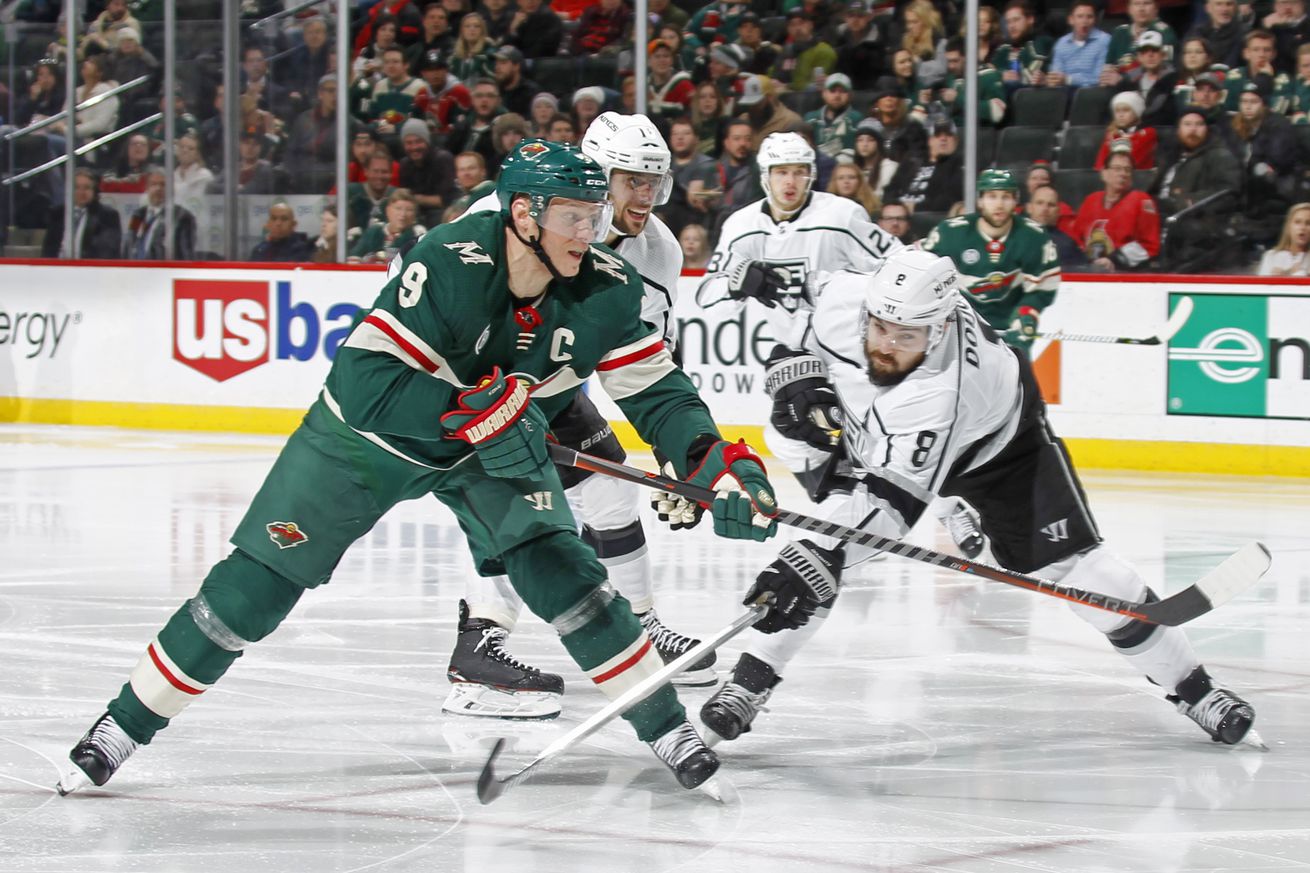 Dubnyk and Eriksson Ek return to practice as the Wild try to rebound after an ugly loss.

As much as a downer the Predators game was on Thursday night, things are beginning to look perhaps just a little bit brighter for the Minnesota Wild.

Devan Dubnyk is practicing today for the #MNWild. He’s currently taking shots from Joel Eriksson Ek, who is also back on the ice. pic.twitter.com/P6pu3peprQ

First, Friday’s practice at TRIA Rink saw the return of goaltender Devan Dubnyk and forward Joel Eriksson Ek. Dubnyk left the game against the Oilers with an upper-body injury after colliding awkwardly with Ryan Donato and Edmonton’s Brandon Manning, causing him to miss his next scheduled start against Nashville. Eriksson Ek has been out since his heroic three-blocked-shot shift versus the Montreal Canadiens on October 17. It’s unclear whether either player will be ready to suit up against the Kings (Eriksson Ek is reportedly closer to playing than Dubnyk), but it’s good to see both players making strides.

As things stand, Alex Stalock looks to get his second straight start, and a golden opportunity to rebound from four-goal shellacking at the hands of Nashville. After a two-game homestand where the Wild won both games, got a then-struggling Eric Staal off the schneid and generally showed signs of starting to put things together, they went on the road to face the Predators, and in one fell swoop regressed into the Wild that we’ve seen throughout the start of the season — a team that can put together a strong period, but falls victim to defensive breakdowns and gives up goals in bunches without putting the puck in the back of the net themselves. The result? A 4-0 loss to Nashville, a team that has now won seven straight against the Wild.

But while the Predators are among the class of the Central Division, the Los Angeles Kings are in the cellar of the Pacific, and the Wild have a chance to capitalize on a team that ranks dead last in goals allowed (39 GA), 29th on the penalty kill (70.3%) and scores a measly 10 percent of the time on the power play. The Kings are also in the midst of a four-game road trip, and will play the first game of a back-to-back on Saturday night that will end Sunday against the Chicago Blackhawks. They’re also coming off a lackluster loss against the defending champion St. Louis Blues, where the Kings watched two one-goal leads slip away before the Blues flipped the switch, scoring three power-play goals en route to a 5-2 decision.

Getting two points in the NHL is never automatic. But if the Wild, who have won their last two games at home, can’t get at least a point against the struggling Kings in the middle of a long and difficult road trip…

Best not to think about it.

1. Can the Wild keep the Kings ice cold on the power play?

Considering the difficulties both teams have putting the puck in the net and with Jonathan Quick guarding the cage, Saturday’s game is shaping up to be a low-scoring affair. The Wild would do well to stay out of the box in general, but should Wild players find themselves in the sin bin, minimizing the Kings’ opportunities to capitalize will be key. Preventing the Kings from improving on their 4-for-39 power play will go a long way to ensuring the Wild end up on the right side of scoresheet.

2. Will the real Alex Stalock please stand up?

Saying Stalock has had a roller coaster season so far would be an understatement.

Question is, which is the real Alex Stalock? The Stalock that blanked the Senators and stood on his head to preserve a win in a relief appearance against the Oilers after Dubnyk went down? Or the Stalock who has allowed a total of eight goals in his last two losses? Granted, Stalock hasn’t looked all that bad, and many of the goals he let in (in the Montreal game, especially) were due more to the breakdowns of his defenseman than it has to do with anything he did or didn’t do. But the numbers are the numbers, and the Wild aren’t going to win many 5-4 games this season. Stalock has to be good in order to keep the team competitive. So which version will be in net when the Wild take on the Kings?

3. Can this team get/stay healthy?

The Wild infirmary has a longer line than a high school nurses’ office on test day. In addition to Eriksson Ek and Dubnyk, the Wild are also currently missing Kevin Fiala and Jordan Greenway, they’re still without Greg Pateryn and just recently got back Victor Rask and Mats Zuccarello. The Wild desperately need to get some or all of their missing players back, and it would be great if they were completely healthy on their upcoming roadie against the Stars and Blues. So, can they do it? Can they get some of their walking wounded back, without adding any more names to the injury report?