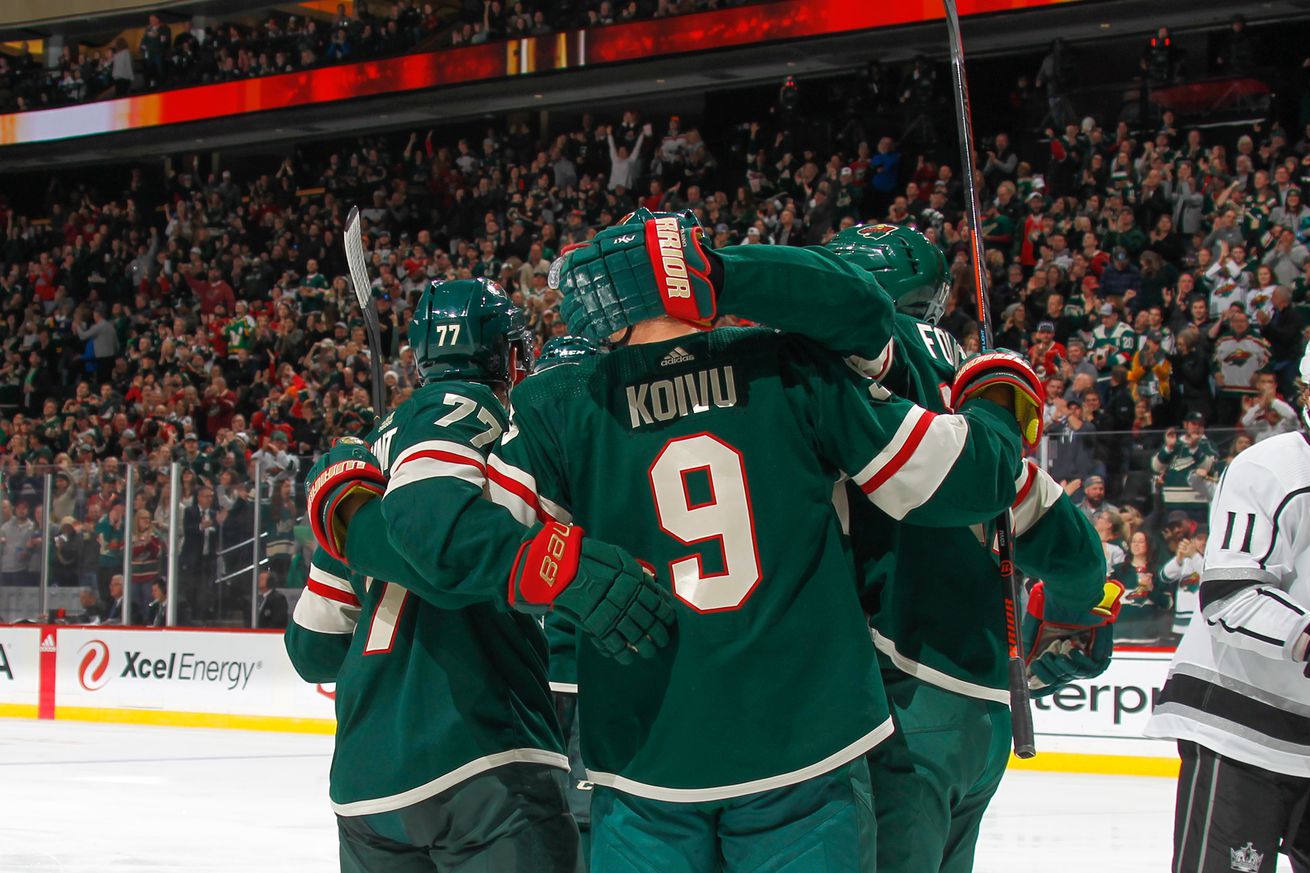 Just what the Wild needed.

If there’s one thing that’s consistent about the Minnesota Wild, it’s their inconsistency. After winning consecutive games for the first time in 2019-20 — against the Montreal Canadiens and Edmonton Oilers, respectively — the Wild travelled to Nashville to take on the Predators on Thursday, which wound up being one of their most frustrating performances of the season.

Luckily, the Wild bounced back in a big way Saturday night, taking down the Los Angeles Kings in a 5-1 route on home ice. Despite being outshot by Los Angeles (31-27) and decimated in the faceoff circle (they only won 37 percent of their draws), the Wild created a ton of quality scoring chances and took full advantage of them. Kings netminder Jonathan Quick just didn’t look like himself Saturday night. Alex Stalock, on the other hand, was nothing short of brilliant.

Perhaps even more encouraging than the play of Stalock, however, was the play of captain Mikko Koivu. The 36-year-old scored his first goal of the season and finished the night with a stellar 58.33 CF% at 5-on-5 — and his linemates were just as good. The trio of Koivu, Marcus Foligno and Ryan Hartman finished the contest with a downright fantastic 66.67 CF% at 5-on-5 and generated more scoring chances than any of Minnesota’s other three lines.

The Wild now get a couple days off before embarking on a two-game road trip — a back-to-back beginning in Dallas against the Stars and ending in St. Louis against the Blues. Not exactly the easiest turnaround, but a good test for the Wild as they look to dig themselves out of their early hole.

Answers to our Burning Questions

1. Can the Wild keep the Kings ice cold on the power play?

Yes! The Kings’ power play has been pretty pathetic all season, and that didn’t change Saturday night against the Wild. Los Angeles had three chances to score on the man advantage, but failed to convert on each attempt. Going into their contest against Minnesota, the Kings were scoring on just 10.3 percent of their power plays — good for 27th in the NHL. Now, they’ll rank even lower.

While Los Angeles’ power play is laughably bad, it’s still encouraging to see the Wild not be the team to let the Kings unload on the man advantage. Minnesota’s penalty kill hasn’t been fantastic this season (they’re the 21st-ranked unit in the league), so a good performance, regardless of what team it comes against, is always a good thing.

2. Will the real Alex Stalock please stand up?

It would appear that Alex Stalock is, in fact, a more than competent goaltender! There were a lot of questions surrounding the 32-year-old’s true value as Minnesota’s backup to Devan Dubnyk, but through six appearances this season, it’s hard not to be impressed with the veteran netminder. His game against the Kings was easily one of his best thus far, stopping 30 of 31 shots en route to his second (official) win of the season.

3. Can this team get/stay healthy?

Yes! Though Deven Dubnyk and forwards Jordan Greenway and Kevin Fiala are still missing in action, no one else got hurt against the Kings, ending a nice little string of games in which the Wild had to deal with some sort of new injury. Defenseman Carson Soucy did look slow getting to the bench early in the opening stanza when he took a heavy hit near center ice, but he remained in the game.

It’s looking like both Dubnyk and Greenway are close to returning to the lineup. Fiala’s injury doesn’t seem too serious either, so don’t be shocked if he’s back in the lineup soon as well.