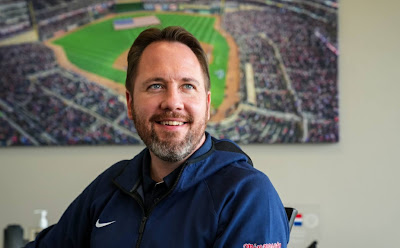 It’s been a few days since the Minnesota Twins allowed the dust to settle on their 2021 Trade Deadline moves. With some big names leaving the organization, and some big prospects entering, it’s time to take a look at the talent that moved places.

The headliner was obviously the Jose Berrios move. As a fan, this one was always going to be hard to stomach. Berrios was drafted by the organization, developed, and became one of the best pitchers in Twins history. As it became increasingly evident that he would not sign a long-term extension with the club, moving him made more and more sense.

Derek Falvey had to maximize the return on Berrios is there was going to be a deal, and he did absolutely that. I noted Austin Martin being my desired target should a swap with the Blue Jays be the plan of action. Still though, getting controllable pitching needed to happen considering Minnesota was moving an ace. To get both Martin and Simeon Woods Richardson was an absolute coup, and it was the strongest return any swap generated during the deadline.

Of the teams in on Jose Berrios, this is the headliner that needs to come to the #MNTwins for me:#Dodgers Dustin May#SFGiants Marco Luciano#RedSox Tanner Houck #Rays Shane Baz#Padres C.J. Abrams#BlueJays Austin Martin

I wrote up the Cruz swap last week and getting Joe Ryan looks like a very strong return for a guy that’s an impending free agent and had limited suitors. While Nelson Cruz is great, there was never a point in which I thought he’d bring back much to work with. Instead, the Twins got Team USA’s game one starter in Ryan, and a flier that’s close to major league ready in Drew Strotman. No matter how Falvey organized this one, he did incredibly well.

Flipping J.A. Happ to the Cardinals was impressive as well. I’ve kicked the notion that he could be seen as valuable to someone for weeks. That always was tongue in cheek with how poorly he’s pitched but leave it to St. Louis to make me look smart. John Gant is under team control in 2022, and that gives the Twins a veteran arm with a longer runway to decide a future on. He can both start and relieve, although he’s currently in Rocco Baldelli’s pen. Gant has pitched well above expectations this year, and his FIP suggests some massive regression is coming. That said, if the Twins can unlock another tier, they may have something to work with down the line.

It wasn’t unexpected to see Hansel Robles moved, although I did think that Alex Colome may wind up being the more coveted reliever. Boston sent back a non-top 30 arm in Alex Scherff, but the 23-year-old has big strikeout numbers and is already at Double-A. Although he’s a reliever, that’s still a useful arm to add for an organization needing to develop pitchers for the highest level.

There has to be some criticism directed at Falvey and Thad Levine, although none of it should be for what they did. Instead, not trading Michael Pineda or Andrelton Simmons looks like a missed opportunity. Both are impending free agents and serve no purpose to this club down the stretch. I’d like to see Pineda back next season, but that could happen on the open market anyways. There’s no reason for this team to hold onto any semblance of respectability and turning the results over to youth makes more sense than ever. Simmons has been fine defensively, but he’s non-existent at the plate and some contender could’ve parted with a bag of balls for a shortstop upgrade.

When the bell run on July 31, we had seen the most exciting trade deadline in Major League Baseball history come to an end. The Minnesota Twins bettered their future, and made some high impact moves that both Falvey and Levine should be praised for. Now it’ll be up to the organizational infrastructure to develop and best position these talents in an opportunity to bear fruit and turn the tides of the big-league club.